I regularly bang on to anyone who’ll listen about how much better I like my kids now that they are older. The baby and toddler years were tough for me and the preschool ones not much better. I have enjoyed parenting much more since they started school (funny that!) I thought it would be interesting to have a look at parenting stages and the differences between under 5s and over 5s. Perhaps it will give those struggling with under 5s some light at the end of the tunnel!

As a parent of over 5s I have to deal with far fewer bodily fluids. Poo and wee generally end up in the toilet without my intervention (I say generally because I have a son so, you know..) and drool is a thing of the past.

The only bodily fluid that’s worse now is sick. Older children’s sick is so much worse to clean up. When they’re babies it’s all just milk so really not that bad to clean up (evidenced by the fact that many parents have a habit of catching it in their hands). By the time they’re in school there seems to be loads of the stuff. Plus they still seem incapable of aiming so it never ends up in the bowl. I’m holding out hope that by the teen years they’ll have it down and I’ll be done with other people’s bodily fluids for good (or at least until we’re old and I have to start wiping Chris’s bum).

Parenting Stages winner: Under 5s, nothing is worse to me than older children’s vomit.

This one is undoubtedly better with over 5s. While I am still occasionally dragged from my bed because “My blanket is tangled” or “I can’t find the teddy that’s laying right next to me”, for the most part they sleep through the night. Really hope I didn’t just jinx it by writing that.

Parentung Stages Winner: Over 5s, even if I do have to go in, I’m usually out again pretty quick

For a stay at home or work at home mum this is a no brainer. Once they start school that’s 6 hours a day where no one is asking you for a drink every 5 minutes and no one wants to know who would win in a fight, a shark or a T-Rex. Unless you home educate, in which case I salute you, I love the idea but love 6 quiet hours more. The only trouble is the school holidays. Having enjoyed such peace and tranquility, days filled with “He hit me”, “She looked at me” “He breathed near me” come as a terrible shock to the system.

No more CBeebies. No more Peppa Pig. As I write this I can hear “Show me, Show me” starting next door (not because they have it on loud, because my house is so blissfully quiet) and I almost feel nostalgic about children’s television. Over 5s TV is a mixed bag. Some of it is awesome (Phineas and Ferb), some of it is bizarre (The Amazing World of Gumball) and some of it it rubbish (Ben 10). Over all I’ll take it over another episode of the Octonauts. There is also the joy of family TV shows. My kids are absolutely obsessed with You’ve Been Framed and god help me when they discover the X Factor.

Parenting Stages Winner: Over 5s, I do not miss Peppa.

I’m pleased to report that now my kids are 6 and 8, soft play is on the way out. They’ll still go but unless it’s got something extra to offer, they’ll get bored pretty quick. They’ve moved on to trampoline parks now. This is great because Chris loves them too so I can just go drink coffee in peace. They’ve also graduated to the “big rides” at theme parks. Chris and I love theme parks and it seems the kids are adrenaline junkies too so it’s brilliant going on fast rides together.

Parenting Stages Winner: Over 5s, even when we go to the cinema, the films are bearable these days.

This is a tricky one for me. I’m a bit weird and I actually really liked baby and toddler classes. I actively miss singing nursery rhymes. The activities they do now generally involve us being a taxi service and often require getting up early or being out late, neither of which I’m keen on. On the plus side they are usually drop and run, so it’s not all bad.

This is probably the one that has changed the least between under 5 and over 5. Girl Child in particular is just as picky if not more so and they still both whine for snacks constantly. The only good thing is eating out has improved because they have the patience to sit through three courses. When they were under 5 we could only really keep them from wrecking place for long enough to shovel down two courses so it’s nice to have a starter again.

Parenting Stages Winner: Over 5s, but I only just, pickiness did at least feel normal in an under 5.

All in all, it’s definitely easier having over 5s so if you’re slogging through the under 5 years right now, hang in there, it will get easier, just enjoy the singing while you can! 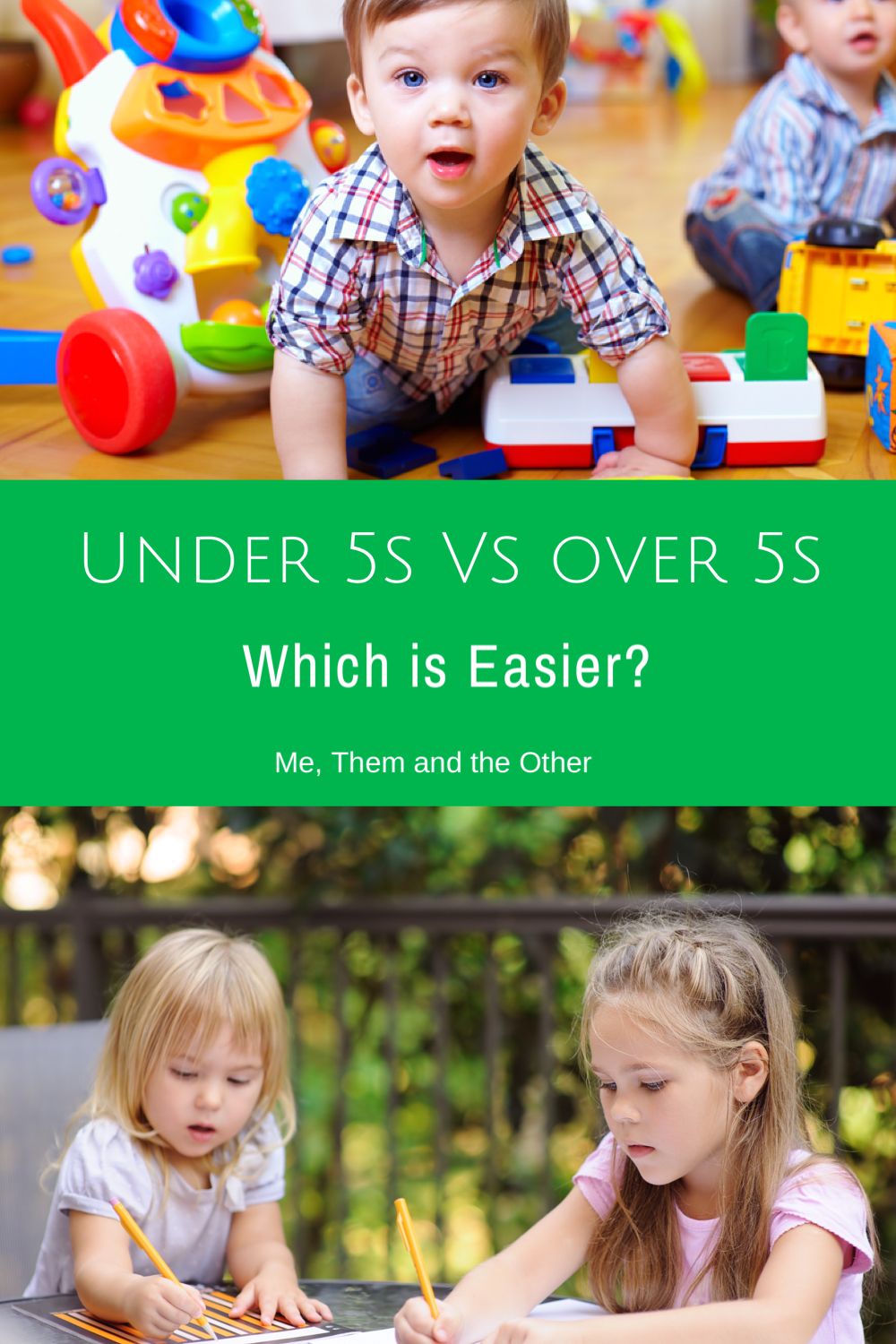