Before I had children it never occurred to me that some people are more suited to certain parts of parenting than others. In fact for a long time, I just felt like I was shit at it. As my kids have grown older I have come to realise that actually, I’m just not temperamentally suited to the early years, and that’s ok. If you’re struggling through at the moment with under 5s, hang in there, you’re not a bad parent and it does get better. Here are the reasons why the early years just weren’t for me.

I like to be alone for a good proportion of my day (or at the very least, when I’m having a wee). Small children do not like to be alone. This is a bad combination. I spent a fair bit of the early years hiding.

Of all of the bodily fluids, dribble is my least favourite. Unfortunately it’s also the most prevalent. That phase where they blow bubbles with it was not my favourite (and resulted in more hiding).

While I’m crap at cleaning, I do like things to be tidy. I can’t relax if the room is messy. This left me with the option of spending all my time tidying up (never gonna happen, see my next point), or leaving it till then end of the day and always feeling slightly on edge.

This is isn’t something I realised until I had children. I’ve always had lots going on in my life but it’s tended to be mental stuff. Stuff I could do from my sofa. It was only when I had a small child demanding something every time my bum hit a seat that in realised how lazy I really am.

Weather you get migraines or not, you probably know that when someone has a migraine they need a quiet, dark room. When you are a parent you get flashing toys that sing nursery rhymes at an ungodly volume and children whose quietest voice could be heard on Mars. Migraines and small children are entirely incompatible.

I’ve actually no idea if this is just my children or all children, but they love to repeat things. Sounds, words, actions. They do it over and over and over again. It drove me nuts. I always felt bad asking them to stop because it’s not really that unreasonable but it was that or resort to more hiding.

Having small children really disrupted my eating habits. On a Sunday, I liked a lazy breakfast, at around 9am, while watching the news. Gone. I liked to have a nice, quiet cup of tea and a biscuit (or 5) when I got home. No more. I liked to go out to a restaurant and enjoy three courses at my leisure. No chance. With small children it’s three meals a day and two healthy snacks, consumed at the dining table while talking which teletubby is your favourite.

I love being at home, pottering about, reading, snuggling on the sofa. You wouldn’t imagine that would change much when you have kids. You’d be wrong. Being at home with small children is the worst. They whine, demand snacks and wreck the place. Plus the clock moves at half speed, so out I had to go. Even soft play is better than a baby and toddler at home.

So, those are the reasons I’m not cut out to parent the under 5s. I’d love to know if anyone else has found themselves really not cut out for certain stages of parenting?

If you’ve enjoyed this, you might also want to check out my post about Under Fives verses Over Fives. 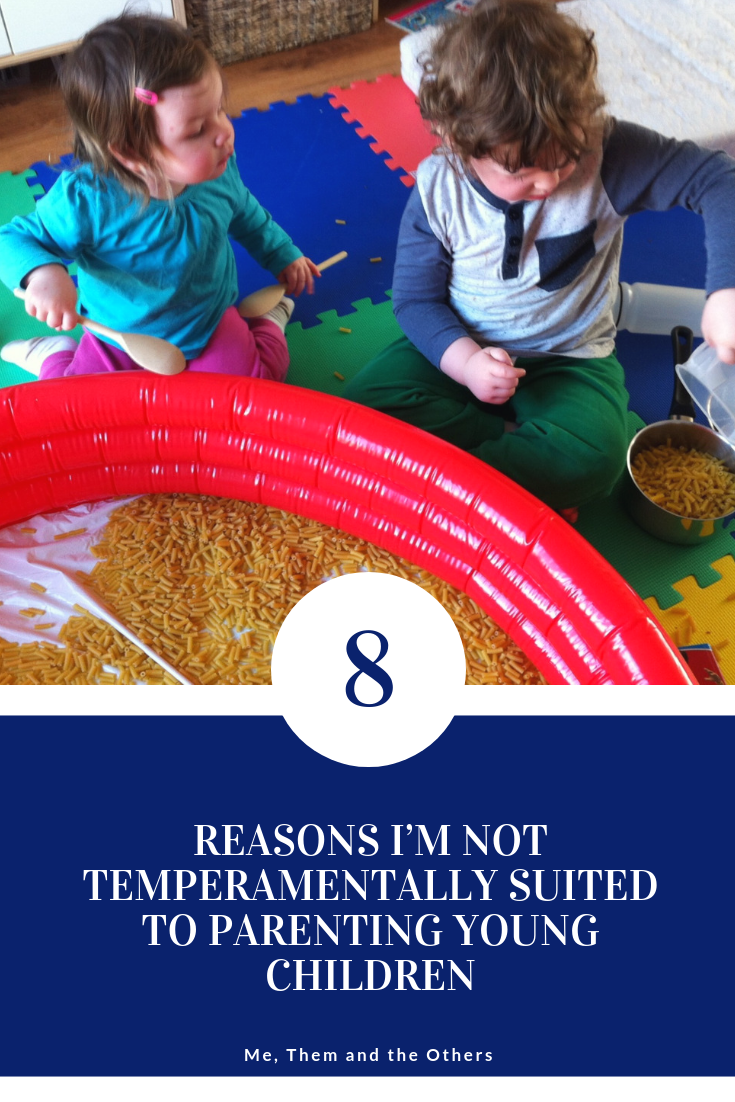