You are here: Home / Babies and Toddlers / Babies / In Praise of Routine (Even if it Did Make Me a Bit Bonkers)

As I’ve mentioned before, I read The Contented Little Baby Book when I was pregnant and was horrified when my baby didn’t immediately settle in to the routine suggested in the book. Gina Ford’s message clearly hadn’t miraculously made it’s way to my unborn child, who knew?  Despite this, I was absolutely adamant that my baby would have a routine. The chaos of being baby led was not helping my postnatal depression and I had soon had enough of driving aimlessly around in order to make nap times happen.

I get that routine isn’t for everyone. There are plenty of people out there who are happy to let the baby eat when it feels like it. They will spontaneously go round to a friends for coffee even though it’s nap time. I am not one of those people. Don’t get me wrong, I’d like to be. Mostly because I assume they must be really enjoying motherhood if making nap time happen isn’t their number one priority. That laissez faire style of parenting was never going to be for me.

Looking back, I can clearly see I was a bit obsessed with routine. To the point where I may have been acting a bit crazy. Here are some of the things I did to try and establish a routine.

Eventually, some aspect of all this (although I’ve no idea which) worked and we established a routine. While that did help massively with my PND, I remained fairly obsessive.

The classes and groups we attended were based around nap times and, once we started weening, meal times. I missed out on seeing friends because he would only nap at home, never in his pram and I couldn’t risk upsetting the routine by missing a nap.

Car journey’s were a nightmare. He was still inclined to fall asleep in the car which would mess things up completely, I lived in terror of danger naps. This meant that all journeys longer than about 15 minutes had to be taken at nap times. If we were driving back from somewhere and it was nearly time for his sleep I would be blasting out the nursery rhymes and singing along at the top of my voice to try and keep him awake.

My in laws started to look after him when he was about 20 months. He arrived with a long list of very specific instructions. Luckily they are amazing and claimed to find them very helpful but I’m sure they thought I was bonkers.

As everyone says, second babies just have to fit in and luckily, that’s just what girl Child did. Having her brother’s routine forced upon her from day one seemed to suit her just fine. I even got them to nap at the same time most days. While Boy Child had slept on me quite a bit as a baby, I was too scared to let Girl Child do it much after 6 weeks in case I ended up stuck on the sofa under a baby again. I put her in the cot for all her naps from day one. This was great as she slept well there but did mean I missed out on a lot of cuddly sleeps.

Where they actually a bit brainwashed?

I suspect that my strict adherence to routine may have somewhat brainwashed the children. Boy Child napped until he started school and even then carried on napping at the weekends for a few months. Girl Child napped until she was nearly 4. I suspect that because I had been so strict, a day without a nap was simply unimaginable to either of them for a long time.

Now they are older, 6 and 8 at the time of writing, our routine is much more relaxed but we do still have one. They aren’t allowed downstairs until they are dressed, we do spellings everyday before breakfast and we have “Quiet Time” (which should actually be called “Ipad Time” but quiet time makes me sound like a much better parent) after lunch at the weekends. It’s lovely not having to stick rigidly to a routine but I think still having one minimises how much I have to yell at them to brush their teeth or do their homework, a bit anyway.

I would love to know if you had a routine or not and if it worked for you. 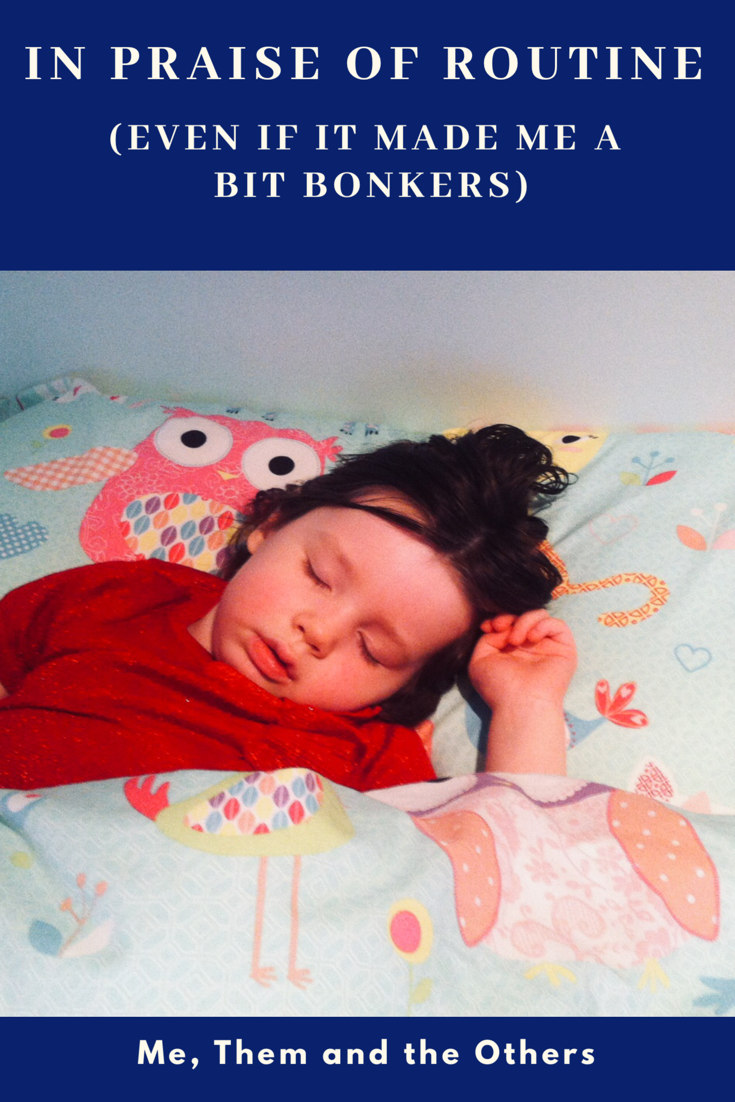