You are here: Home / Parenting Life & Humour / Seasonal / Sibling Gifts: Should my Children Buy Each Other Christmas Presents? 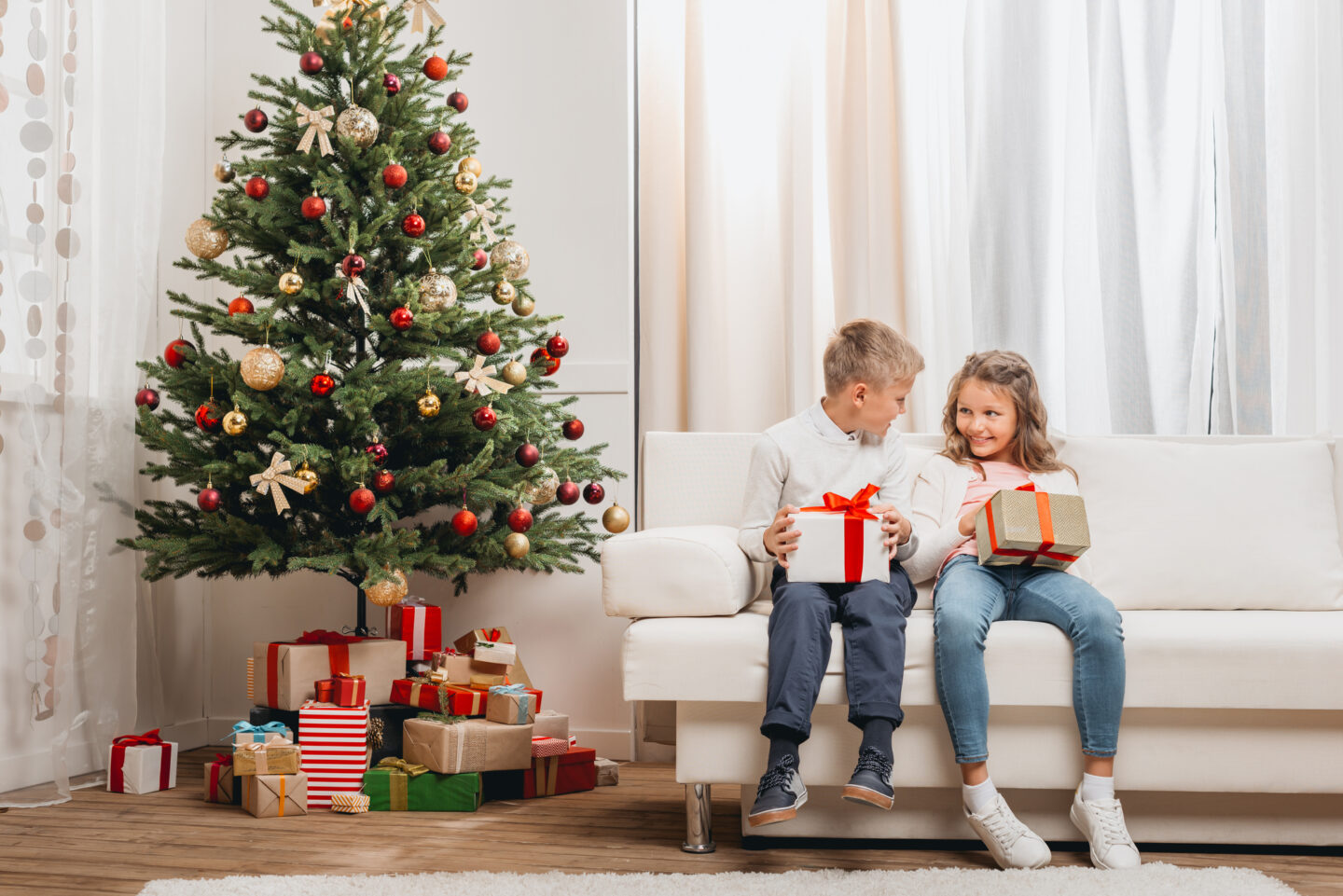 As previously mentioned, I’m an only child. The sibling relationship is a mystery to me. One minute they’re playing happily, the next they’re trying to attack each other with forks when my back is turned. Their lives often seem like a never ending game of one-upmanship related to who has the bigger piece of cake, the best spot in the sofa and who the puppy likes more. In the past, we’ve never bother with sibling gifts, but now that they are older, I’m wondering, should my children buy each other Christmas presents?

Why my children don’t currently buy each other Christmas presents

When Boy Child was a baby, we agreed that we wouldn’t bother taking him to the shops to buy a Best Mum/Dad mug/key ring/photo frame/pair of pants until he was old enough to appreciate what he was doing. This was essentially fuelled by our preference to not walk around with “worlds greatest parent” written on our under crackers and, to be honest, we carried on with the rule quite a while after the children were old enough to appreciate giving us gifts.

This attitude just seemed to naturally extend itself to the children buying each other Christmas presents. When they were very small, it would have been meaningless and, once they were a bit older, while they certainly wouldn’t have been buying each other any “Best Brother/Best sister” merch, we suspected the gifts would have added to our tat collection just as much.

I don’t seem to be the only parent not to bother with sibling gifts (which lowers my parenting guilt somewhat):

“Now that are only 4 and 5 and they have so many presents already – I think I may consider it when they are a bit older and understand it all a bit more.” Life with Lianne

“Mine are 4 and 7. All our presents to them are from Santa and they have a few from family members too. I imagine it may be something they want to do when older, but at the moment they are too excited about Santa bringing them gifts!” Lylia Rose

If I had taken my children out to buy each other Christmas presents as soon as they were old enough to know what it meant, I suspect one of two things would have happened. First, their naturals child’s selfishness would have kicked in. They would have simply chosen what they wanted. Girl Child was so obsessed with Teenage Mutant Ninja Turtles that she’d have only been interested in buying those for Boy Child. Boy Child in turn would have bought her a load of football cards, despite the fact she collected Pokemon ones. This would then likely result in them not wanting to hand over the gift when the time came, meaning tears on Christmas morning.

The other possibility was that they would be in the “I hate my sibling” mindset at the time of the shopping trip (roughly 70% of the time) and would have intentionally chosen something crap. Due to Sod’s law, the other child would have been in the “I love my sibling” mindset (3% of the time), and would choose them something lovely and ended up with hurt feelings when they got their crap gift.

I’m also pretty sure that by Christmas Eve, every time there was an argument I’d have had to listen to cries of “I hate you, I’m not giving you your Christmas present now” followed by tears because “I really want my Christmas present!”

Who pays for the children to buy each other Christmas gifts?

Is it really gift giving if they just choose and I pay? I’m not sure. The trouble with this is I’m also pretty tight and have avoided giving my children pocket money until this year. At 7 and 9, they get 50p and £1 respectively. Not enough to by the latest must have toy. For a lot of parents that do have their children buy each other Christmas presents, paying for them is the answer:

“Our children suggest/pick gifts for each other, then we buy them” Our Transitional Life

“My three – aged 8, 5 & 2 – all buy presents for each other. I buy and pay for them because I’d like to instill the tradition of doing so – I’d hate to think of them being adults and not getting each other something at Christmas!” Confessions of a Crummy Mummy

“Mine have been buying each other gifts this year (they’re 8,7 and 5) They like to use their Go Henry cards and go to somewhere like b&m to spend a couple of quid on each other . They think they’re paying but we just bung an extra few quid on their cards so its not coming out of their pocket money. Coffee, Cake, Kids

If they had enough money to go Christmas shopping for their sibling, I’d still be worrying about the imbalance. One spends all their pocket money on something lovely while the other pops to the corner shop and picks up some penny sweets. Cue more tears on Christmas morning (are you sensing a theme here?)

So while I could carry on as I am, I do actually think the kids have reached an age where they would get some pleasure from buying a present for each other so here are my possible solutions.

If you’re really lucky, your school might solve the problem for you:

“Mine buy presents for each other, each year at primary school they have a christmas bazaar which is specifically for them to buy gifts for family members, which I obviously provide the money for, then once they are older and earning money they buy them themselves. They love wrapping the gifts and giving them as much as receiving.” Big Family, Organised Chaos

I think I’m probably going to go down the pound shop route this year. As much as the homemade idea seems lovely, getting them to make the Christmas decorations to give their teachers and writing their Christmas cards is such hard work that I don’t think I can add anymore to my to do list.

I’d love to know how you manage sibling gifts in your house?

Liked this Post? Why not pin it for later! 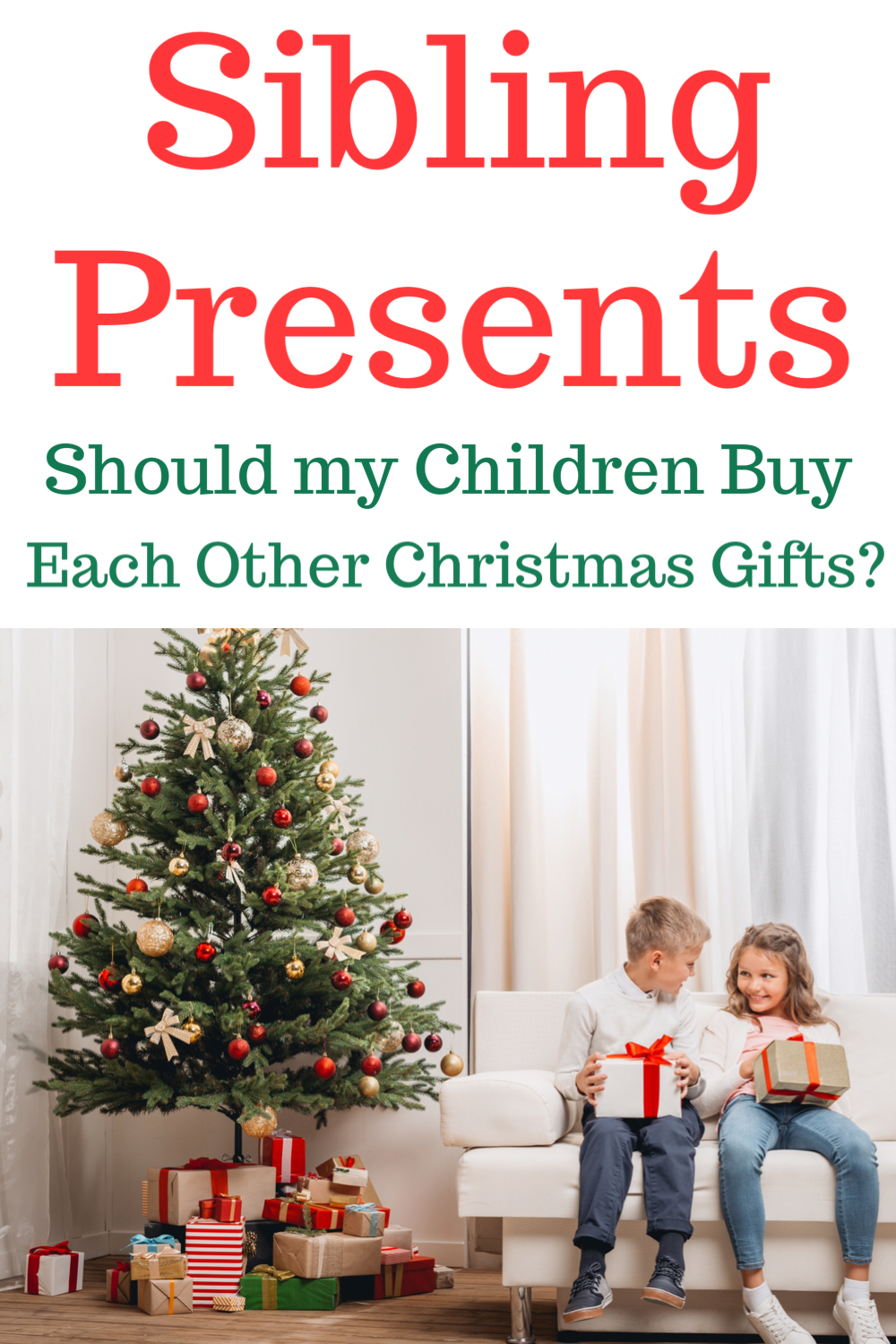