While most toddlers go through a picky stage, most come out of the other side to eat a fairy well rounded diet, albeit usually lacking in vegetables. Unfortunately, that hasn’t been the case for our youngest who, at 7, still eats a very restricted diet. In my mission to help her expand her diet, I’ve gathered some tips from other mum bloggers that they have found useful when dealing with fussy eating in older children.

The “No Thank You Bite”

Like most kids my kids can be fussy eaters sometimes. I still try to get them to try new things though. To help that we have implemented the ‘No Thank You Bite’ in our household. This idea came from a show my kids love to watch. Referring to the cartoon also helps us make sure this rule followed. (It was on T.O.T.S. on Disney Jr) The rule is that they have to at least take one bite of anything there is on their plate. If they don’t like it, that is fine, they just then say “No Thank You, I don’t want anymore”. This makes sure they at least try one bite of new things and sometimes it ends up that they really like it and keep eating it. If they don’t like it, they don’t have to eat it. Some days the kids will be super fussy and say they don’t like anything, so I remind them they at least have to take one no thank you bite. Next thing I know my daughter has eaten all her green beans and tells me “Those were really yummy mommy”. Kids taste buds seem to change on the daily or so it seems, having them try the same things on different days could have different results. Just be patient and keep at it. Heather from Embracing Chaos with Love

Preparing Food in Different Ways to Experiment with Texture

My 9 year old daughter has always been a picky eater. Even as a baby she would reject certain foods. She dislikes anything with a soft or gushy texture (grapes, cooked vegetables, melon). Experimenting with different textures and preparing food differently has helped tremendously. I freeze grapes and leave vegetables raw or cut them into sticks. Sometimes, children like the taste but cannot handle the textures of certain foods. Changing the texture solves the issue! Ashley from Midwest Mamma

We have utilised the smell, lick, bite method with our son. He’s still very much a fussy eater but he is more open to trying new things rather than dismissing them straight away. Sarah from Boo Roo and Tiger Too

Have a Reset Week

We make a point of talking about the food we like, the ones we aren’t so keen on and those we really dislike. I think it’s important when trying to get kids to eat, that they understand that eating a balanced and varied diet is more important than just eating only the foods we love. This was part of out reset week. Amanda from Mummy2Twindividuals

We have gone with an approach of offering a variety of foods at a meal, some new some liked. Then no pressure on having to eat anything in particular, they can pick and choose what they want. It gives them the feeling of control and inevitably they will at least try the new things. Gemma from Mummy’s Waisted

Eat Together When You Can

Eat Meals Together. I realise this isn’t always possible, but eating meals together allows you to expose your child to a wealth of tastes and smells in a natural, pressure-free environment. He may think he only wants to eat one bland item, but seeing you eating something that smells or looks interesting, may pique his curiousity. I don’t think there’s any harm in suggesting he tries a little off your plate either. This was how I discovered that my ‘fussy eater’s’ favourite food is curry! Lucy from  The Parent Game

Have tapas type meals where they can pick little bits of different food they like and it’s even better if they have to ‘create’ something with their hands often means they eat more – wraps, fajitas, tacos, tapas, pull apart break with different fillings, falafel, flat breads with different vegetables/ meats all work well for our kids. Louise from Thimble and Twig

I found using a story is a great way of helping children to eat their meal. You can set the food out on the plate in order of how it’s encountered in the story and the children eat as they follow along. This is ideal for some fussy eaters who struggle with things being mixed on their plate. You can also buy “dinner winner” story food plates to help with this. Only from Savvy Dad

Grow Your Own Food

We found that growing things from seed really helps as they are more willing to try things that they’ve ‘made’. Also getting them involved in the cooking process. Choosing recipes, coming to buy the ingredients and helping cook makes them more interested in trying the final product. We’ve also always told them that tastes change and if they don’t like something, they might in future so we just present them a little bit to try every so often. If they still don’t like it, no bother, but often they will be surprised that they do like it! Louise from Pink Pear Bear

Switching Meals Around Can Work for Fussy Older Kids

I would serve the kids their main hot meal at lunch when they were not so tired then just something light at dinner time that they can just pick at.
I found they eat whatever I serve at lunch much better than if I serve it later in the day. This way if they dont eat at dinner time you at least know they have had something nutritional in the day. Rebecca from Northamptonshire Mums and Kids

I encourage my kids to help make dinner with me. They can see the ingredients that are going in and are more likely to eat it when they’ve seen how it’s made. Depending on what it is, some of the ingredients can be tasted as they’re added so they’ll know when it’s served that they like it. Jennifer from Mighty Mama Bear

One of my son’s default setting is to say ‘no’ to having any food outside of a set list of the ones we know he likes. If we encourage / persuade him to try just one piece of the new food each time we serve it up, he often gets used to it and will tolerate it much more easily in future. Little steps, little servings work for us! Clare from My Tunbridge Wells

I would advise having a friend over for tea, who you know eats well. Having an example of a peer eating everything works wonders. Also when they are at school sitting and seeing their friends eating can really help. Ruth from EatCartwright

There are lots of tips here fro dealing fussy eating in older children, some will suit your child and some won’t. My top tip for dealing with fussy eating in older children is to stay relaxed. I know it’s not easy, but turning mealtimes into a battle won’t improve things and will likely make them worse. While your child’s diet might look awful on the surface, when you examine exactly what they are eating, you might find its more balanced than you imagine. Realising that can help you worry less which in turn can make older kids more open to trying g new foods. 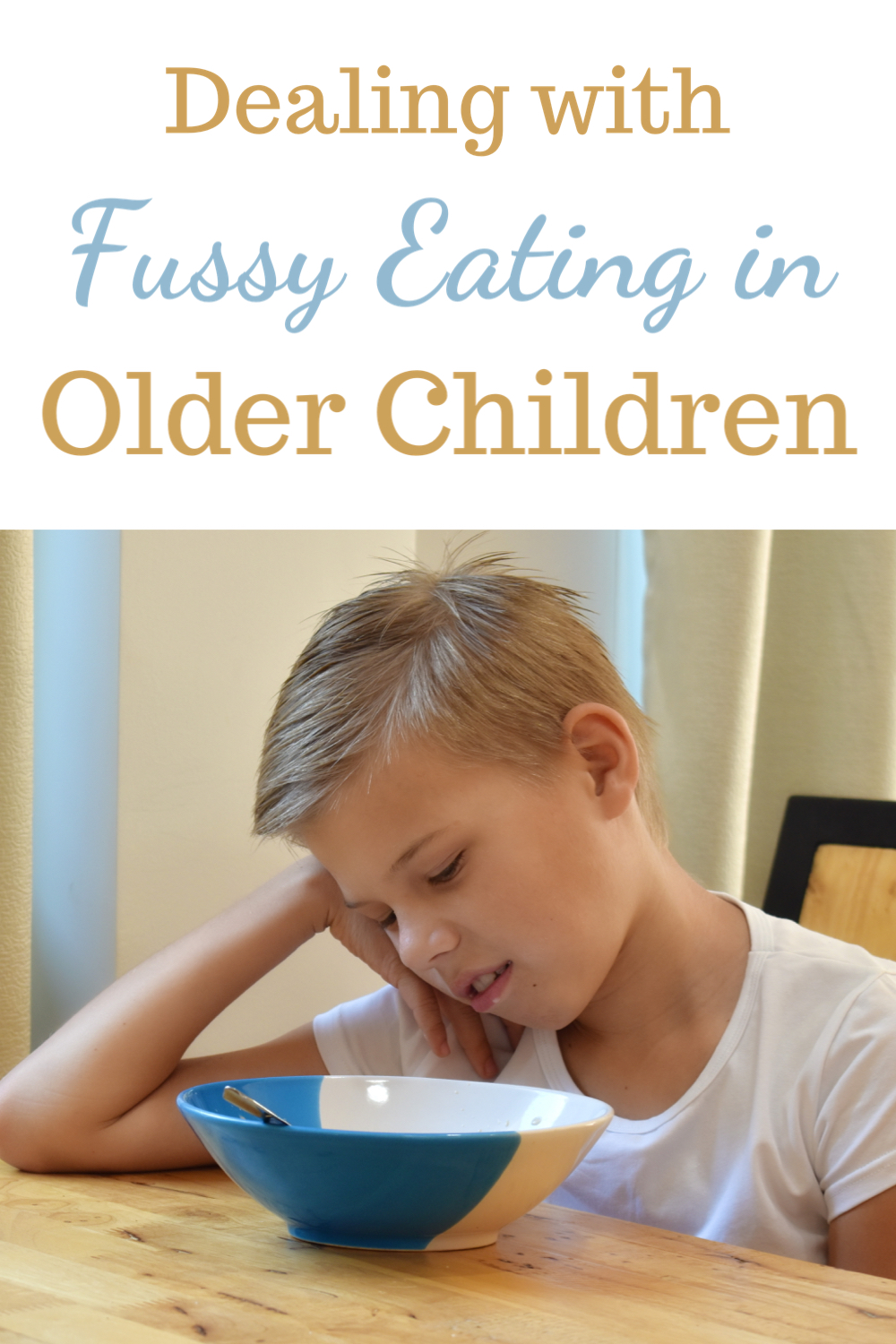