Girl Child has always been a fussy eater. When Boy Child was a baby, he would eat anything he was given. Not so Girl Child. Both of them were weaned with baby led weaning (because I’m too lazy to purée). Both of them were breastfeed until they were 13 months (because I’m too lazy to sterilise bottles). However, while Boy Child went through a picky eater phase as a toddler/preschooler, he has gradually widened the range of foods he eats and will now (aged 8) eat whatever I cook most nights. Girl Child is 6 now and her diet is still significantly restricted. Despite this, As parents we try to take a relaxed approach to fussy eating, this is why my daughter goes to bed without dinner most nights.

Did my Weaning Method Create a Fussy Eater?

As a baby, I offered her a wide range of different foods. We did babyled weaning so none of them were purées. While she was quite keen on fruit, I’m not honestly sure she has ever consumed a vegetable that wasn’t in a sauce. She liked yoghurt, cereal, cheese and would eat some meats. She loved bread but wasn’t really interested in other starchy food like potatoes, rice or pasta. There didn’t seem to be any particular texture she disliked, and there still isn’t now.

As she got older, the range of food she would eat got narrower and narrower. Meat was soon dropped and starchy foods other than bread wouldn’t be touched. In desperation, I tried offering her what we call “crap from the freezer”. When Boy Child went through his fussy eater phase, it was all he would eat and never went to bed without dinner. I imagined she was going through the same phase. She wouldn’t touch it. No chips, no potato waffles, no fish fingers, no chicken nuggets, no frozen sausages.

For a long time she would eat salmon (typical she would choose the most expensive thing to carry on eating) but eventually that was dropped too. When she was around 4, we reached the point where the only dinner food she would eat was cheese and tomato pizza. And that’s where we’ve been ever since.

How Would You Feel if your Toddler Went to Bed Without Dinner?

To start with I found this really hard but I refuse to give her pizza everyday. Partly because it’s not very healthy and partly because I’m terrified that if she eats it too often, she’ll decide she doesn’t like that either. She has pizza twice a week and on the other nights she is offered what we’re having or a slice of bread and butter. She inevitably chooses the bread and butter but rarely eats more than a couple of bites. And so she goes to bed with no dinner.

It sounds terrible but in all this time, she’s never complained that she’s hungry at bed time or even first thing in the morning. She remains at a healthy weight (we check it on the NHS website) and while that’s still the case I will try to put my worries aside and trust her body. She eats a big breakfast and decent sized lunch and this just seems to be enough for her.

What She Does Eat – Focussing on the Positives

I think it’s important to look at the positives, it’s likely your child is actually eating a more balanced diet than you think. I comfort myself with the thought that she eats well at breakfast and lunch time. She loves cereal and porridge and will eat a big bowl of either in the mornings. One of her staple foods is hummus which is at least pretty nutritious and that usually features in her lunch. At school she has a hummus sandwich, a packet of crisps or a yoghurt, a malt loaf and some strawberries. Strawberries are the only fruit she will reliably eat now but she will occasionally have an apple or a satsuma (and by have, I mean eat two bites then leave it laying somewhere for me to find).

Eating out is a problem, particularly as we all love eating out. Our fussy eater does in fact love eating out too. The trouble is we are limited to places that have pizza on the menu and you’d be surprised by the number who don’t. Poor Boy Child is thoroughly sick of Pizza Express and Pizza Hut (and so are we). After a recent swimming lesson, traffic in town was gridlocked so we decided to walk to MacDonalds for dinner. I can’t imagine what the staff thought when the order for a cheeseburger with no burger came through. She claims to like the fries there but in reality only eats a few before declaring she’s full. I try to see the positive, at least she isn’t eating junk food!

We’ve tried all of the usual advice but with no success. Snacks have always been strictly limited. She often helps me cook but still has no interest in the finished product (unless it’s cake!). We’ve tried taking her to the shop and letting her choose things she’d like to try.

Our core approach to this whole thing has been to stay relaxed and keep the pressure off. I can’t say that it’s worked because she’s still as limited as she was two years ago but she will still regularly try new foods and I feel that if we pressured her, she wouldn’t even be doing that. So many food issues are actually power issues and we’re keen not to escalate that.

When she started school she decided to have school dinners on pizza day. Unfortunately the dinner lady suggested she try some pasta and for her that felt like too much pressure and so she’s packed lunch everyday now. When she does does try new food, we don’t make a big deal out of it, we just say good girl for trying and move on. Most often she declares it delicious and then changes her mind after the second mouthful.

Will She Always Go to Bed Without Dinner?

As she gets older, I hope that things will improve. The fact she still tries new foods gives me hope. The fact that she likes bacon and cheese gives me hope (she clearly has functioning tastebuds). For now I’ll continue with the relaxed approach, keep offering her what we eat and hope that one day she’ll discover the same love of food the rest of the family shares.

Enjoyed this Post! Why not pin it for later! 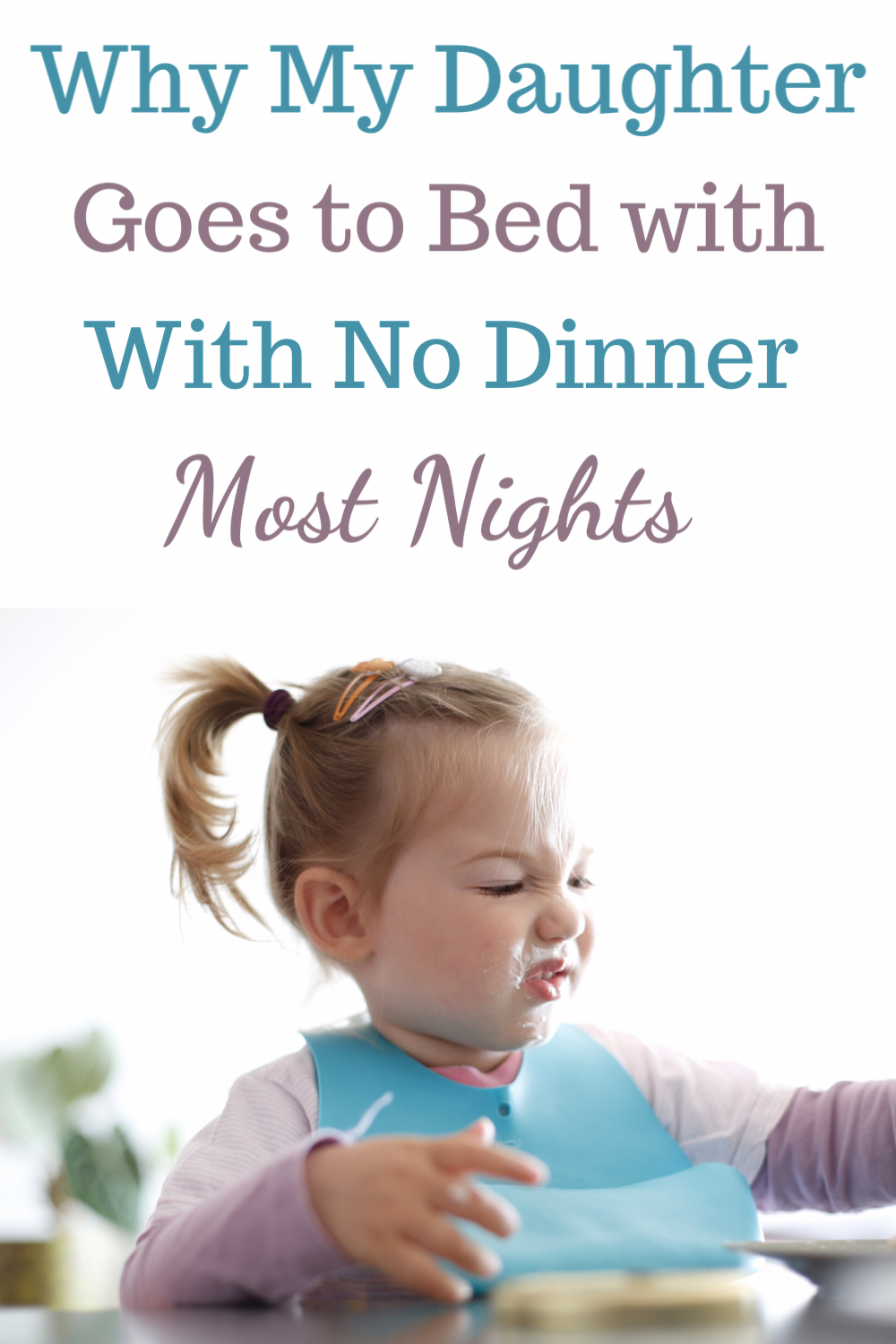