If you’re regular reader, you’ll know that I’ve had my regrets about not delaying school entry for my summer born son. For him, it’s had a big impact on his experience of school, both academically and socially. However, there are plenty of parents who have had different experiences of a summer born child starting school not long after they turn four so I thought it would be useful to share some of those. If you’re worried about your child starting schooling, you can also check out this post on helping your summer born child.

Concerns about Missing the Reception Experience

Lots of parent’s, myself included, were heavily influenced by the fact that it can be very difficult to get a school to agree for a child to delay entry and then join the reception class, with many insisting that children who have delayed entry skip reception and go straight into year 1. While this is gradually changing, it still depends a lot on the school and where you live.

It depends whether you defer a year or miss a school year going straight in at year 1? My eldest, now 9, was born in June. I am glad I didn’t defer him, he is doing very well academically, and I think those first few months in reception are really important. For him missing reception would have been a shame, it gets them used to school in a gentle way. It’s when first school friendships are made.
Had we deferred a year and started in reception with the year below I think he would have become bored and not challenged enough. This is based on my eldest though. Every child is different no matter when they’re born. Erica from Things to Do in Kent

My August baby had just turned four when she started reception but as a summer baby myself I knew she would be fine – pre schools do so well at preparing them and while you notice the difference in ages in reception by year 1 you’re hard pushed to tell the autumn babies from the summer ones. We didn’t consider holding her back because she would have joined the same class when friendship groups would already have been formed and I didn’t want her missing out. Five years later she’s about to go into year 5 & we definitely made the right decision. Natalie from Confessions of a Crummy Mummy

We didn’t consider holding our June daughter back for a year. She was so ready for school. I think it really does depend on each child, but it would also have been a shame for all her preschool friends to go to school and her to stay in preschool another year. I’m an August baby and had no issues starting school when I was newly four, so this probably stopped me from ever questioning our decision or considering deferring our daughter. I was often the youngest in my school year and academically it made no difference for me. Victoria from Lylia Rose

For some parents, the physical ability of their children has been a cause for concern at school:

My eldest is an end of august baby, he was 4 years and 3 weeks old when he started primary school. He is starting secondary school in September and whilst academically he is doing fine, even reaching greater depth in some areas. His writing has always been a cause of concern for his teachers. I believe he just doesn’t have the same wrist dexterity as his peers where some are almost a whole year older. Socially he is doing fine, he has remained with the same group of children since preschool.

Back when I made the decision for him to start school just turned 4, there wasn’t an option to go into reception. It was a straight year 1 enrolment and I believed (and still do) that reception plays such an important part in education. It helps to build social skills and to help give some of the skills and development needed for a more formal learning environment. However, if he hadn’t had such a strong friendship group in pre-school and a reception start was guaranteed, I probably would have held him back. Jaymee from The Mum Diaries

Social skills can also be a concern for children who are nearly a year younger than some of their classmates, this can cause further issues if they are also particularly bright.

I have an August Born boy, he was just 4 when he started reception and is now off to secondary school. He’s achieved greater depth in all areas and has excelled at school. It hasn’t been without problems.

At the time we couldn’t have delayed entry it would just have been skipping reception year and going into year 1. What we did experience was that teachers and support stuff couldn’t get over the discrepancy between his academic abilities and his physical and social, we were referred to an occupational therapist who basically wrote the school back and said he is was just a very bright 4 year old with age appropriate physical and to not compare him to peers that could be 12 months older than him so 1/4 – 1/5 of his age again. Cerys from Rainy Day Mum

People often don’t realise that some four year olds still nap regularly and that can be complicated when combined with the school day. My son continued napping at the weekends for the first term.

My August born boy is preparing to start year 5. I have it some consideration but ultimately he was ready for school in almost every sense and I could see him getting bored at nursery. He napped every day after school in reception but at the end of year 4 he is excelling at school, he is happy, confident and I don’t think he has been held back by being the youngest, in fact the teachers have always been shocked when they realise (doesn’t help that he is a giant child). My June baby is starting in September and my eldest have me confidence to believe she will be the same. Becky from The Adventure of Parenthood

In general, with the benefit of hindsight, most families are happy with the choice they made for their summer born child starting school shortly after their 4th birthday. It does very much depend on the particular child so hopefully the above stories have given you some ideas about the issues you might face if you have a just turned 4 year old starting school. 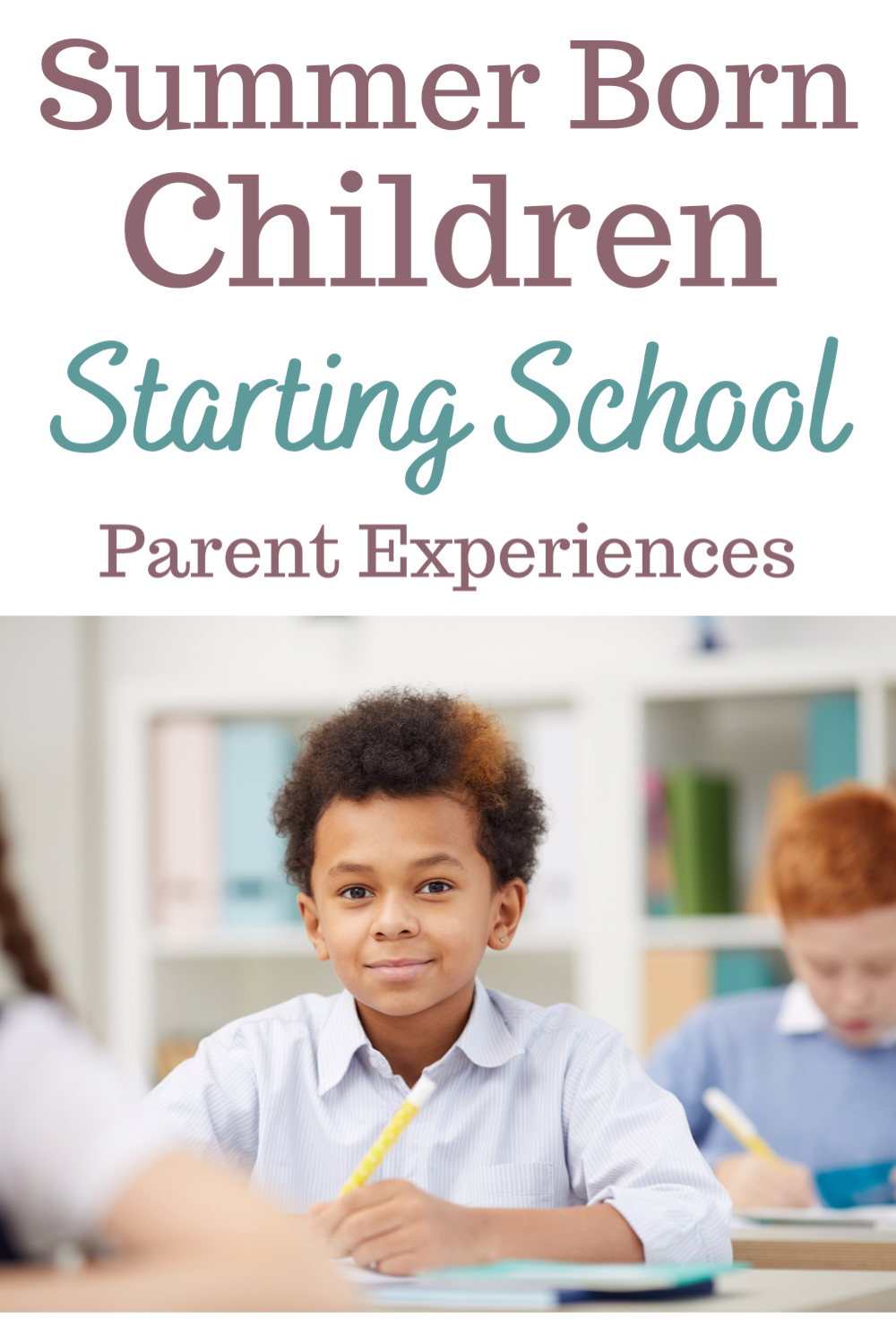