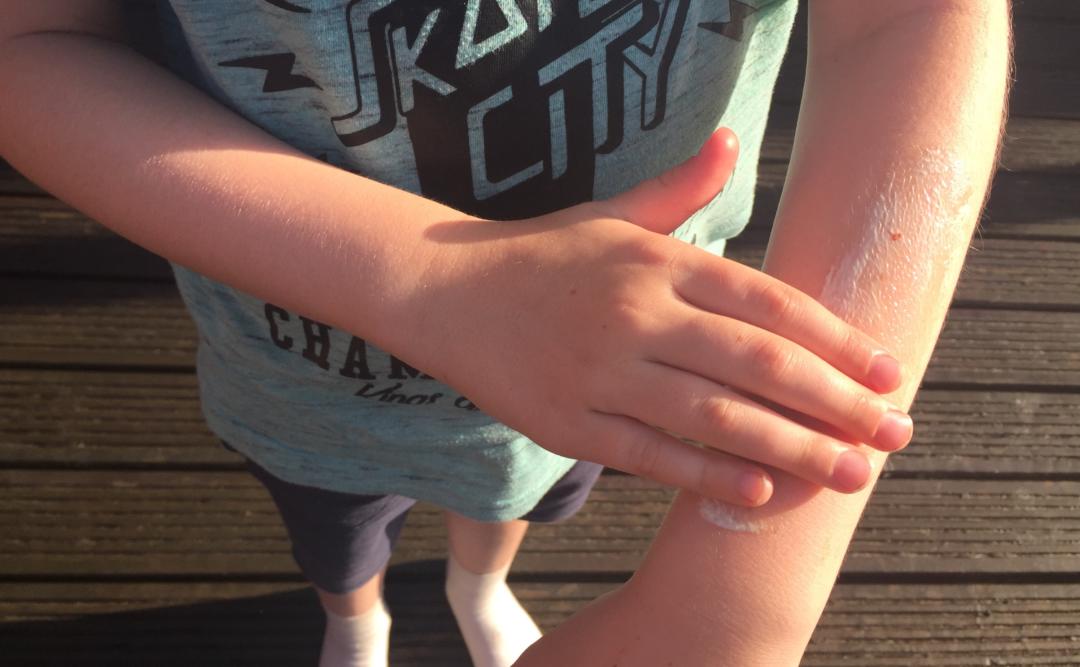 Hell’s itch may sound like something you get “downstairs” but it’s actually a rare, itchy, painful reaction to the process of sunburns healing. It’s torture for adults and hell’s itch in children is even worse. I feel like a terrible parent for letting it happen to my child but wanted to share our experience of dealing with Hell’s itch.

If you are reading this while you or someone else is suffering, to save you reading the whole thing to find out what to do, I will say here that the fastest way to stop hell‘s itch is with a hot bath or shower. There are more tips but this is the most instant relief for hell’s itch.

It Started with a Sunburn after a Day at the Beach

Last Sunday we spent the day at the beach. It was a hot day we with a cool breeze. We applied sun cream when we arrived and then intermittently because the kids were in and out of the sea all day. Unfortunately, when we got home, we realised that I had somehow managed to miss the bottom two thirds of Boy Child’s back with the sunscreen and he was sun burnt. Over the next few days we applied aloe Vera regularly and that seemed to be working, it wasn’t peeling or blistering.

On Tuesday night before bed, he said his sunburn was itchy. I did a quick google search and, without actually clicking on a link, found a list of suggestions for itchy sunburn. The suggestions included Piritin (an antihistamine) and cortisone cream. We had both in the house so used them before bed. When I went downstairs, I Idly clicked on the article about itchy sunburn and read for the first time about the phenomenon known as Hell’s itch.

When Does Hell’s Itch Start?

Unlike sun poisoning, which starts within hours, hell’s itch usually starts around 48 hours after a sunburn has happened although it can occur anywhere between 24 and 72 hours later. We were at the 48 hour mark when Boy Child got the itchy sunburn that signalled the start of hell’s itch for us.

What is Hell’s Itch and Why Does it Happen?

The severity of the sunburn doesn’t seem to be a big factor in whether or not it happens. Boy Child’s sunburn was fairly average but my Mum has also had it once after a very severe sunburn where her whole leg blistered.

It’s fairly rare but seems to be to do with some confusion that happens in the body when the sun damaged nerve endings start to heal.

Many people describe it as the worse pain they’ve ever experienced, with some women comparing it to labour. Thankfully, it’s fairly rare which is why you’ve probably never heard of it before.

People describe it as feeling like you are being bitten by fire ants. It’s an intense itching, however scratching the itch results in a stabbing pain rather the relief.

When Boy Child called for us around midnight, I quickly realised what had happened. My poor child had Hell’s itch sunburn. His description matched exactly what I’d read earlier in the evening. He said that he felt like tiny teeth were biting his back. He begged us to scratch it but when we did he cried out with pain. Hell’s itch in children is awful to watch, there is simply no way to comfort them. He was writing and crying and nothing I did seemed to help.

So Much Worse than Just an Itchy Sunburn

As his last dose of antihistamine had worn off, we gave him more of that and applied more cortisone cream. Getting the cream on was hard because it’s fairly thick and difficult to spread but worth it as it did help a little bit. It was clear that there was no way he could sleep so we went downstairs and put the TV. As the antihistamine started to kick in, the distraction of the TV helped to calm him down.

Trying to Sleep with Hell’s Itch

During the night it never settled down enough for him to sleep. We tried turning the TV off and going to sleep on 3 occasions but as soon as he tried, all he could focus in was the Hell’s itch. The TV remained on all night and between about 4am and 6am he managed to doze although he was never still for more than a few minutes.

The next morning it was clear that the antihistamine had worn off again, we gave him more and tried another suggestion I had read about, a hot bath. It’s counter intuitive to put hot water on sunburn but this really did help. I’d read that you should have it as hot as you can bear. Luckily Boy Child likes his bath quite hot anyway and while he was a bit scared of putting his back in the water, once he did the relief was almost instant.

How to Treat Hell’s Itch

While there is no way to get rid of hell’s itch instantly and completely, there are things you can do to get some relief, in the short term at least.

Soothe the Itchy Sunburn with a Hot Shower

if you are suffering this is the fastest way to stop hell’s itch. Make the shower as hot as you can bear but ideally don’t have the power too high. You want the hot water hitting you but not too forcefully. The relief is likely to be pretty instant if not total. It will also last for a while after you get out of the shower. We found that that it lasted about an hour in the early stages but the lasted longer as time went on.

Have a Hot Bath with Oatmeal

If you don’t have a shower or have a child who doesn’t really do showers yet then go for a hot bath instead. Don’t add any bubble bath or other additives as they can dry the skin and make the hell’s itch worse. What you can add is colloidal oatmeal. Colloidal oatmeal can help to soothe hell’s itch and it’s something you’re quite likely to have in the house anyway.

All you need to do it throw a handful of porridge oats in a blender and whizz them up. You can then either just throw them in the bath or, if you want to avoid having to clean them up, put them inside a Muslim cloth and ties them to the tap so that the water flows through it.

While there are a lot of essential oils that can be soothing, peppermint oil* seems to be the only one that has an impact on hell’s itch. You’ll need to dilute the peppermint oil in a carrier oil first and then apply it to the affected area. We had some success with it but didn’t get to try it until after the worst had past so I don’t know how effective it would have been when he was really suffering.

We found antihistamines helpful when the hell’s itch was at it’s worst. It makes sense because they are designed to stop itching. We used over the counter allergy medicines like Benadryl and Piritin at night as they have active ingredients that make you sleepy. In the day we used antihistamines with the active ingredient Cetirizine, that is less likely to make you sleepy. We definitely felt like they helped as it was evident when they were starting to wear off.

Use Painkillers for Hell’s Itch

As pain was a factor in the sensation hell’s itch causes, we gave Boy Child regular painkillers. We chose ibuprofen because it’s an anti inflammatory and inflammation is a factor in sunburn.

Cortisone creams are topical steroids that are designed to help reduce itching. You can buy local concentration ones over the counter. We had a 1% hydrocortisone cream in the house so we used that. Continued use can lead to thinning of the skin so don’t use it for more than a few days and they shouldn’t be used in the face at all.

What Not to do for Hell’s Itch

Some home remedies you might use for regular sunburn will actually make hell’s itch worse so avoid the following.

I was frantically googling to try and find out how long Hell’s Itch would last. Estimates suggested between a day and two weeks. Luckily for us, it was about a day before the itchy sunburn improved. He stayed off school that day and I gave him regular antihistamines and basically let him stare at screens all day because he needed the distraction. By dinner time, while he still said it itched a bit, he happily played and helped me with the dinner. We gave antihistamines again before bed and thankfully he slept through night. The next day he was well enough for school.

Will he get it Again? Can Hell’s Itch Come Back?

While very little research exists into Hell’s Itch, anecdotally, it doesn’t seem that people who have had it before are more likely to get it again. My mum is over 70 and has had it just the once. We all have very pale skin in our family so are generally pretty careful about sun exposure and don’t travel to very hot places. In future my poor kids are going to be getting sun protection put on roughly every five minutes because I don’t ever want to have to deal with Hell’s Itch in Children again (or in adults for that matter!)

Top Tips for Getting Rid of Hell’s Itch

Here’s a summary of the hell’s itch remedies we found that helped:

We didn’t have his hell’s itch medically reviewed but if it carried on any longer we definitely would have. If you’re worried, do make sure you see a health care professional.