While 3D Easter Eggs are pretty tricky to make at home and would be too complicated to do with young children, these flat eggs are super simple and really good fun. They can be done by any age from toddlers up to older children. Even I enjoyed having a go.

What you Need to Make Flat Easter Eggs with Kids

Preparing the Chocolate for Your Flat Easter Eggs

Tje first job is to melt the chocolate. I let the kids have some fun banging the bars of chocolate on the work surface to break it up but one packet did burst open and explode chocolate all over the kitchen so it’s probably not actually advisable.

The smaller the chocolate, the quicker it will melt so once the chocolate was broken up I chopped it up a bit smaller and then put it in a bowl. I then put a few inches of boiling water in a saucepan and put it on a very low heat before sitting the bowl over the pan, making sure the bowl wasn’t touching the water. I stirred the chocolate and carried on doing so pretty continuously until it melted.

Putting the Chocolate into the Flat Easter Egg Moulds

I didn’t do anything to prepare the moulds, just made sure that there were clean and dry. My moulds were quite shallow so I filled them almost to the top with chocolate.that result in about 2-3cm of chocolate. I wouldn’t go any thinner than that as they will be too fragile to get out. If you have deeper moulds you could go a bit thicker but personally I think they are nicest to eat at 2-3cm thick.

Decorating the Flat Easter Eggs with the Kids

Once the chocolate is in the moulds it’s basically a case of letting the kids go wild with the decorations. Girl child did one small egg that she completely covered in every decoration and we had and one that she was more considered with. Boy child started off with a plan then went a bit wild. I was going for a pattern but it’s a bit messy!

If you want your eggs to come out in one piece, you need to leave them 24 hours. As the chocolate hasn’t been tempered it will look a little splotchy and if you put it in the fridge to speed up the setting time it will likely look worse so you need to be patient.

Once the chocolate is set, give the moulds a little wiggle the chocolate should just pop out. I had a bit of trouble getting one of ours out but when I turned it over and just rubbed the back of it that did the trick.

The kids loved eating their own Easter eggs and are keen to have a go at making some for friends when Easter comes around again next year. If you’re looking for other Easter activities you might also like our tissue paper died Easter eggs. 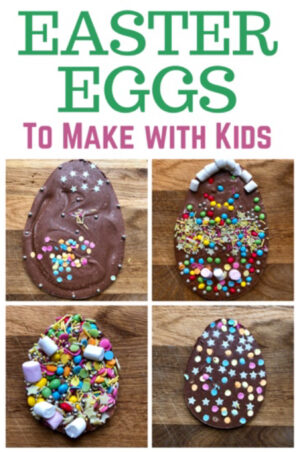