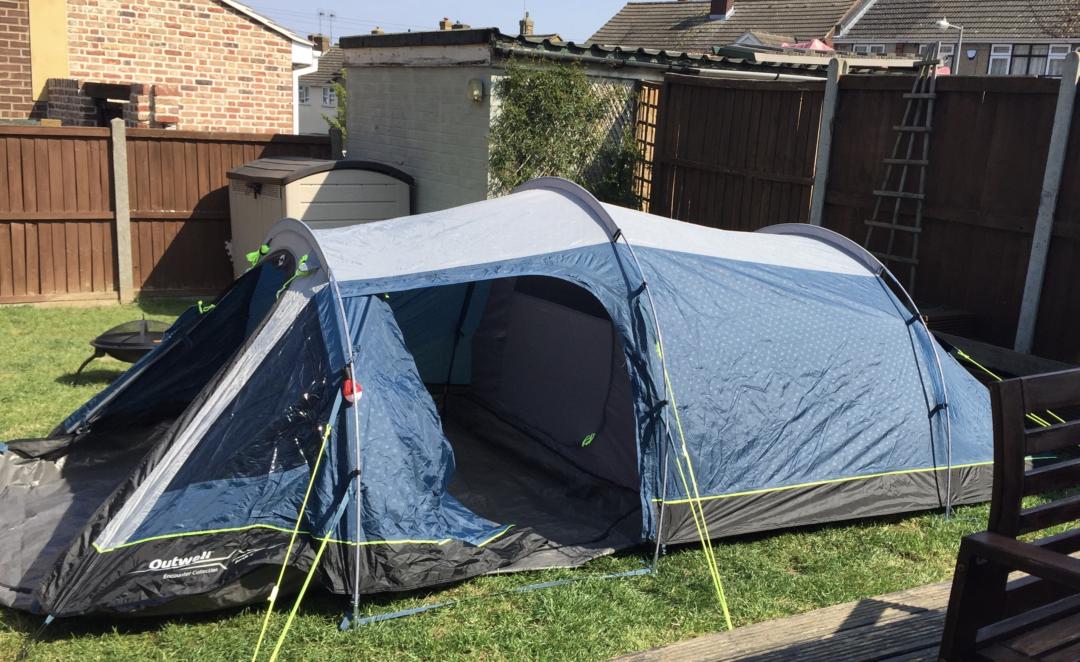 The first time we did camping in the garden was during lockdown, we were expecting to spend part of the Easter holidays in a caravan by the sea. The kids were pretty disappointed to be missing their holiday so we decided to recreate the fun of a holiday at home by putting the tent up in our back garden. Back garden camping turned out to be great fun and it’s something we’ve done a few time since. Here’s everything you need to know as well as some ideas to make it fun.

Top Tips for Camping in the Garden with Kids

Before we get into the detail, I want to share my top tips for camping in the garden with children. There are more details on all of these points further on in the post.

What to Camp at Home in: Tents and Other Ideas

There are certain camping essentials that you can’t manage without and somethingnto sleep in is one of them. Our main tent that we take for our camping holidays is too big to fit in our garden but luckily we also have a three man tent* we bought with the intention of doing trips with just one adult and one child to create some special bonding time. We haven’t actually managed to do that yet but were very glad we had the tent as it’s perfect for camping in the garden.

Camping in the Garden without a Tent

If you don’t have a tent that will fit or indeed have a tent at all, there are some other options. If you have a garden trampoline, that can be turned into a pretty cool tent with some sheets and blankets covering the top and pegged to the sides.

If you’re really outdoorsy and the weather is good, you could just go for sleeping under the stars in your sleeping bags. Even if you don’t last the night, the kids will still love it.

Don’t Have a Garden or Can’t Face the Cold?

If you don’t fancy a night outside you could always just camp indoors. You can make it as basic or luxurious as you want. You could build a fort with blankets, move sofas around to create a den or even bring everyone’s mattresses downstairs for a living room sleepover.

Are you Allowed to Camp in your Garden?

Yes, absolutely! There are no laws to stop you from camping in your own back garden. It is polite however to warn your neighbours that you’re planning to spend the night in the garden. It’s likely you will make some level of noise and they might want to take extra care to shut their curtains if they know people will be in sight of their windows at times they wouldn’t usually be.

If you want to have a fire as described below, you should check your local council rules as some have restrictions on the times it’s allowed. Often they are only permitted after 6pm. It’s also best to make sure none of your neighbours have their washing out before you light a fire.

Useful Equipment: A Camping in the Garden Checklist

You can go as basic or as elaborate as you like for backyard camping. If you’re regular campers you probably already have lots of equipment you can use, if not then you might need to get creative.

What to Sleep on and In

Wherever you’re sleeping, you’ll need something to sleep on. If you’re regular campers you’ll likely have airbeds, self inflating mats* (which are sooo much more comfy than airbeds) or roll mats. Otherwise, if you have yoga mats or foam mats that the children play on, they are great for sleeping on as they are soft and add some insulation. You could drag a rug from the house out to your tent. If not, you can create a fairly comfy bed, inside or out, with duvets, blankets and pillows.

If you have sleeping bags you can use them for the authentic camping experience but personally I much prefer my own duvet which is what I take when we go camping anyway. Just make sure you have plenty of whatever you choose so you’ll be nice and cosy.

You’ll also need some light so gather up your torches, dig out your candles and if you want to make it really pretty, get out the Christmas fairy lights. Head torches are great for kids although it does suck when they shine in your every time they look at you!

A campfire will make camping in the garden feel really authentic but safety should be your first priority. We bought a fire bowl so that we could have a safe and contained camp fire and it was a huge hit with the kids. If you have a chimera, that would work well too.

Others Bits and Pieces

Don’t forget to take teddies or anything else your children need to sleep. If you have eye masks they are great to use to stop the kids from being woken up by the sun.

You want to make it as cosy as possible so take out as many cushions and soft blankets as you can.

What to Eat When You’re Camping in the Garden

While we do have a camping stove which we could have used, we decided to light the BBQ for cooking. We cooked steak on it for dinner and had planned to use it for our breakfast and lunch too but as we were a bit low on fuel, decided to cook those in the house and just eat them in the garden.

A Simple Lunch for Camping in the Garden

Baked beans is the classic camping lunch but I’m really not a fan so we made pizza/quesadilla type things which my kids love. We make them on our stove when we camp so they feel like real camping food for our kids.

You need some wraps, tomato sauce, grated cheese plus pizza toppings of your choice. You spread the tomato sauce on one wrap, sprinkle on the cheese, add your toppings and put another wrap on top. Pop them in a frying pan and after a few minutes, flip it over to toast the other side.

A camping breakfast should really be a fry up but as Girl Child eats a very restricted diet so wasn’t keen, we went for pancakes with bacon and maple syrup instead. If you have a stove or a BBQ with a hob (that’s what we have) then you can do a fry up or pancakes pretty easily. If you have just a BBQ then a sausage sandwich is a pretty good breakfast.

If the children want cereal then you can always pop in and get milk from the fridge. When we camp for real we take an electric cool box but it seemed silly to set that up in the garden so we just popped inside when we needed fridge stuff.

The Most Important “Meal” – Marshmallows!

More important than the proper meals are the camping staple, marshmallows. We toasted some over our fire bowl and then had more in hot chocolate before bed.

Camping in the Garden Ideas

You’ll also need some ideas to keep everyone entertained while camping in the garden. For our kids, a lot of the fun was in being outside in the dark to we focussed some of our camping fun around that.

Glow in the Dark Camping Games

We decided to make the most of that by using glow sticks* for much of our entertainment. First of all, we did glow in the dark bowling. In preparation, we had been saving empty water bottles, we put a glow stick in each one and used them for our pins. We used more glow sticks to create an “alley” running up to them and then borrowed one of the dogs tennis balls to be our bowling ball. It worked well as it wasn’t too windy but I wouldn’t recommend it for a windy day as the “skittles” blow over very easily.

Next we had a go at glow in the dark ring toss. We already had a Quoits set* so just sellotaped some glow sticks to it but you could easily just link two glow sticks together and push them into the ground. We made our rings with two glow sticks linked into a ring using the connectors they came with. This was great fun and we found we were all fairly evenly matched at it.

Glow in the Dark Dancning

The other thing we did with the glow sticks was glow in the dark dancing. We used sellotape to tape glow sticks to the kids to create a stick man, then turned off the lights and filmed them dancing. We have glass patio doors so they could also see themselves glowing while they danced which made it more fun.

Other Camping Games We Played

We played another couple of games while we were waiting for it to get dark. While we sat around the fire we played the name game. You pick a topic, we went with animals, and then the first person has to name one beginning with a, the next person names one that starts with b and so on.

We also played Kims Game. It involves putting a number of items on a tray, letting everyone look for ten seconds, then covering it. Everyone writes down as many things as they can remember that were on the tray.

The three man tent was a bit of a squeeze for 4 of us and the dog and not a huge amount of sleep was had but it’s not like we had anywhere to be! The kids really loved our holiday at home and if you’re are considering camping in your garden I would definitely recommend it. It’s great way to try camping if you or the kids aren’t quite sure about it.

If you’re looking for other things to do with children, check out “Hygge with children” and “How to make the school holidays fun”