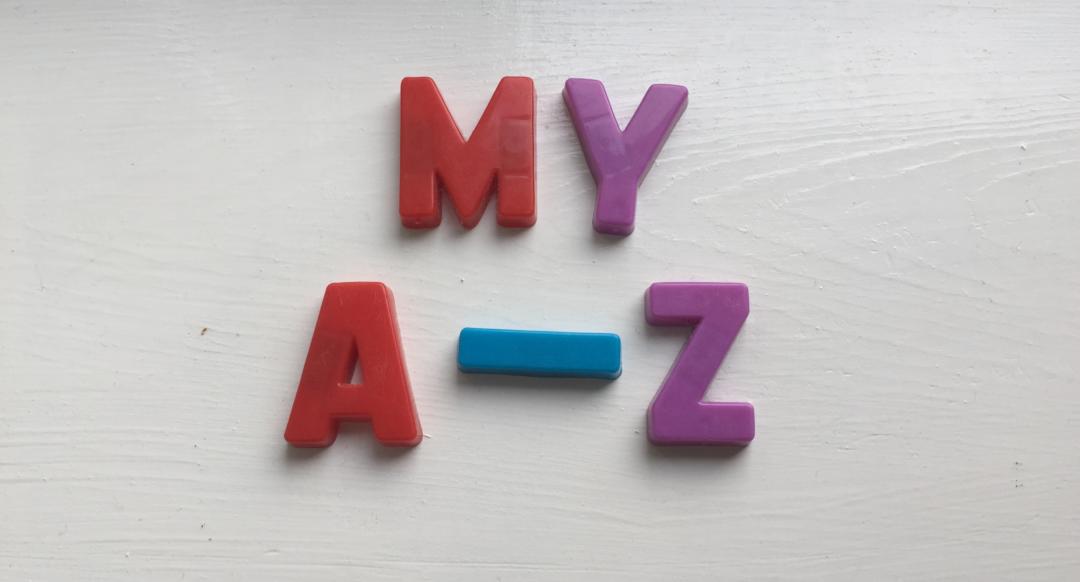 I was tagged in the #parentingalphabetchallenge by Dirt, Diggers and Dinosaurs. The idea is to write an A-Z of your life as a parent and then tag some other bloggers to do the same. Here are my thoughts on life as a parent, in alphabetical order.

A is for Adjustment

I found what I call “The Motherhood adjustment” really hard. With no experience of babies, the relentlessness of Parenting came as something of a shock. I wish I had been better prepared for how much parenthood changes your life.

B is for Boy Child

Boy Child is funny, kind and passionate. He throws himself into everything he does and gives it his all. He is super confident, demonstrated by the time he did stand up comedy at the school talent show and loves to play football more than anything else.

C is for Chris

Chris is my husband and the best Dad a kid could ever wish for. As soon as he walks in the door the kids demand his attention and despite having been at work all day, he’s always ready to give them it. He’s always been hands on, not because I’ve asked him to be, but because that’s how he believes Dads should be.

D is for depression (of the postnatal kind)

I struggled a great deal when Boy Child was born and was diagnosed with postnatal depression when he was 8 weeks old. I was much better by the time he was six months and was lucky not to suffer the second time round.

E is for Eating

I love food. I’ve spent my whole life eating whatever I want, whenever I want but parenthood has put a stop to that. I actually eat a much better diet now because of the whole “setting a good example” thing. I still have my treats, I just eat them while hiding in the toilet these days.

F is for free range parenting

We are trying to take a more free range approach to parenting, encouraging our children to be independent and enjoy some of the freedom we had as children.

G is for Girl Child

Girl Child is clever, kind and funny. She isn’t a “girly girl” and plays mostly with the boys. Girl Child knows who she is and isn’t afraid to be herself. She loves being outside and is desperate to learn how to skateboard, she keeps getting back on no matter how badly she falls.

H is for Home

When I was little my Mum worked from home and I always wanted to do the same, even before I had children. Being a work at home mum feels like a huge privilege and I’m always grateful to have found a way to do it.

I is for internet

I can’t imagine what it would be like to parent without the internet. While I know it can lead to a bad place when people start comparing their lives to other people’s but for me it’s a great source of reassurance that everyone struggles and that’s ok.

J is for Josie

I’m not just “Mum”, I’m Josie too. I’ve tried since becoming a Mum to hold on to my identity, it wasn’t always easy but I’m loving it now the children are at school and I get some more “me time”.

K is for kitchen

Before I had children I think I had some notion of parenthood as being mostly about baking. While this wasn’t true in the early years, I’m now loving spending time in the kitchen with the children, particularly Boy Child who loves cooking and will now happily try any food I make him.

L is for learning

I love learning and before I had kids, it was something of an addiction. While I’m no longer taking courses all the time, I am still learning loads as a parent and I love that my kid’s have given me a chance to go on a whole new learning journey.

M is for Mum

As in, my Mum, she’s awesome. From looking after Boy Child for a few hours everyday when I had PND to having both kids for a sleepover so I could celebrate my 40th, she’s always there when I need her and never judges my choices as a parent.

N is for Nearly New

Running Baby and Children’s Nearly New Sales is one of the ways I make a living and a big part of my life. It’s the perfect business because sellers make money and buyers save money, so everyone wins. I’ve also saved a fortune buying nearly new over the years and saving money always make me happy!

O is for outside

One of my favourite parenting phrases is, “If in doubt, take them out”. A quick trip to the park or a walk in the woods seems to cure all manner of grumpiness and the time left until bedtime seems to pass much quicker.

P is for Play

My least favourite part of parenthood. I really would rather deal with a poonami than spend my time pretending to be owlette in another PJ Masks role play.

Q is for quiet

I do not like noise. Unfortunately quiet and children are not compatible, so I don’t get nearly as much quiet as I’d like. Boy Child had glue ear when he was younger and, while he’s had grommets to fix it, he’s still very loud as a result of the temporary hearing loss which in turn has made Girl Child loud too.

R is for routine

Routine was really important for me when my children were little (I even managed the whole baby and toddler napping at the same time thing!) and even now I feel like it helps things run more smoothly.

S is for Scouting

Scouting is a bit of a thing in our family. My father in law always helped out at scouts and Chris was a scout so it seemed obvious that Boy Child would do it. Four years after he started, he is a Cub, Girl Child is a Beaver, I’m the group secretary and Chris is going on the next sleepover.

T is for tea

Tea is sacred! My children know that Mummy has to “finish her tea” before she’ll do anything else. Unfortunately this results in them hanging over my shoulder trying to see how much tea I have left which somewhat ruins the experience.

U is for understanding

Parenthood has definitely made me more understanding. While I wouldn’t have said I was particularly judgemental before, the experience of finding new motherhood so difficult has made me careful not to judge how anyone else copes with it.

V is for vomit

While all babies vomit, Boy Child was a particularly sicky baby. This theme has continued throughout his life courtesy of extreme car sicknesses. Add to that the fact that Girl Child is fairly often sick from something she’s ingested via her never ending thumb sucking and vomit features way too much in my life.

W is for Whinging

I really bloody hate it. The near constant whinging is one of my least favourite parts of being a parent. In the early days I imagined that if I just ignored it, they would learn that it gets them no where and stop. I’m still waiting for that day to come.

X is for Xmas

I love Christmas now we have kids. There’s a bit of time in your twenties when Christmas loses its sparkle but once you have kids, it’s back to being magical again.

Y is for Yawn

Motherhood is tiring! I love sleep and don’t cope well without it. For a full year every night after each of my children started sleeping through, I went to bed feeling massive gratitude for the fact I was likely to get to stay in bed for the whole night.

Z is for Zero

Because, while I have found motherhood hugely challenging, I have Zero regrets about taking the leap.

So, that’s my A-Z, I now tag the following bloggers to share their A-Z of what parenting means to them.