So, as I’ve said before, I was completely, sorrowfully unprepared for parenthood (and it seems I’m not the only one.) Here are the 10 things I wish I’d known before children.

How many people would put there fingers up my hoo ha

When you decide to have a baby, you think about having a lovely bump and then a squidgy baby to cuddle. What you don’t realise is that, in order to get from the lovely bump to the squidgy baby, the world and his wife need to poke at your lady bits in the manor of a small boy picking his nose. The bonus is that there’s a good chance you’ll never have smear fear again.

That Night feeds are not just feeds

Obviously I was aware that babies need to be fed in the night. What I didn’t realise was that babies have no concept of the DIFFERENCE BETWEEN DAY AND NIGHT! Why? What horrific design floor is this? It means that when they wake up for a feed, they are just as likely to decide it’s playtime, as they are to go back to sleep.

That The sound track to my life would change

When they were small I would put them in the sling, turn the music up and dance around till they fell asleep (not ideal sleeping conditions for an adult, but works a treat for babies). Once they start learning to talk, things change. They repeat everything they hear. The Prodigy’s “Smack my B**** up” is replaced with “Ride a Cock horse”. Hang on, wait, what?

Within the first 6 months you will think nothing of wiping dribble with your hand, catching vomit or continuing to wear a top you’re pretty sure has been weed on. Having said that, I was still traumatised when one of them was sick in my ear.

About the enforced diet

When I was still very sleep deprived with my first child, I consumed an entire packet of chocolate biscuits a day. When I was sleep deprived with my second child, this was no longer possible. Every time Boy child heard the rustle of the pack he was there, shouting “snack time, snack time!” And so, for fear of turning him into a blimp as well as myself. I was forced to wait until actual snack time and to consume only a reasonable number of biscuits (5 is reasonable, right?)

That Kids throw up in their sleep

I shit you not. Presumably they wake up when they actually throw up. Then, instead of thinking “ooo, I should call someone to clean this up” they just go back to sleep. My kids have done this on numerous occasions, two in particular stick in my head. The first was on Boy Child’s third birthday. My Mum made him a fire engine cake, plastered with bright red butter cream. When we went in the next morning it looked like a scene from a bad vampire movie.

The other time was the day Girl Child decided she liked salmon (a miracle given her eating habits). We were so excited that we let her eat a whole fillet. In the morning, the smell hit us as soon as we opened her door. Washing dried chunks of salmon vomit out of a two year olds hair before you’ve had your morning caffeine is not recommended.

That Children poo in inappropriate places

The idea of this would have horrified me pre children. Poo goes in the toilet and that’s that. Toddler however have other ideas. My children have done it while crawling across the carpet, on the decking in the garden and smeared down the patio door, as well as each doing one in the bath for good measure. On each of these occasions, they seemed completely unaware they had done it.

Many people who decide to have children will tell you that while they don’t like kids in general, they love their own. What they don’t mention is the fact that they still have to deal with other people’s children all the time. From getting puked on by someone else’s baby at massage class to breaking up fights when your kid’s bestie comes to play. There’s no escape.

That I would use text messages to have private conversations

Once your kids are old enough to understand you, there will be times when you’ll need to text someone who is sitting right next to you. This is because, if you mention an activity in their hearing, you will have to do that activity. So, if I casually suggest taking the kids to the park in their earshot, they will harass us until we do it.

The Number 1 Thing I Wish I’d Known Before Children: That There would be Parasites

Not that the children are parasites (I mean they are, but that’s not where I’m going with this). I mean the kind they bring home from school. ‘Nuff said (and if you don’t know what I’m on about, your time will come).

While I’ve called this post “10 Things I Wish I’d Known Before Children” I have realised I should really have called it “10 things it’s best I didn’t know before I had kids” because let’s face it, who’s going to sign up for that!

If you’ve enjoyed this post then you’re in luck, as it’s part of Write Club there are 9 other fantastic bloggers who have written posts on this very topic so why not go and check them out!

Nicole from Tales from Mammaville can think of waay more than 10 things, Helen from Twins, Tantrums and Cold Coffee is wishing she’d appreciated her pre children life a bit more, Carly from Mom of two Little Girls, is also considering things from her partners perspective, Helen from The Mulberry Bush warns us to choose our reading materials carefully.  James from You have to laugh wants to give his preparent self a good talking to. Erica from The Incidental Parent, wishes she had been warned about my personal pet hate, dressing up days and Anna from Me, Annie Bee, wishes she’d known that “Peppa is like Smack for Preschoolers”. Finally, Kate from The Mum Conundrum is missing being able to take a sick day. 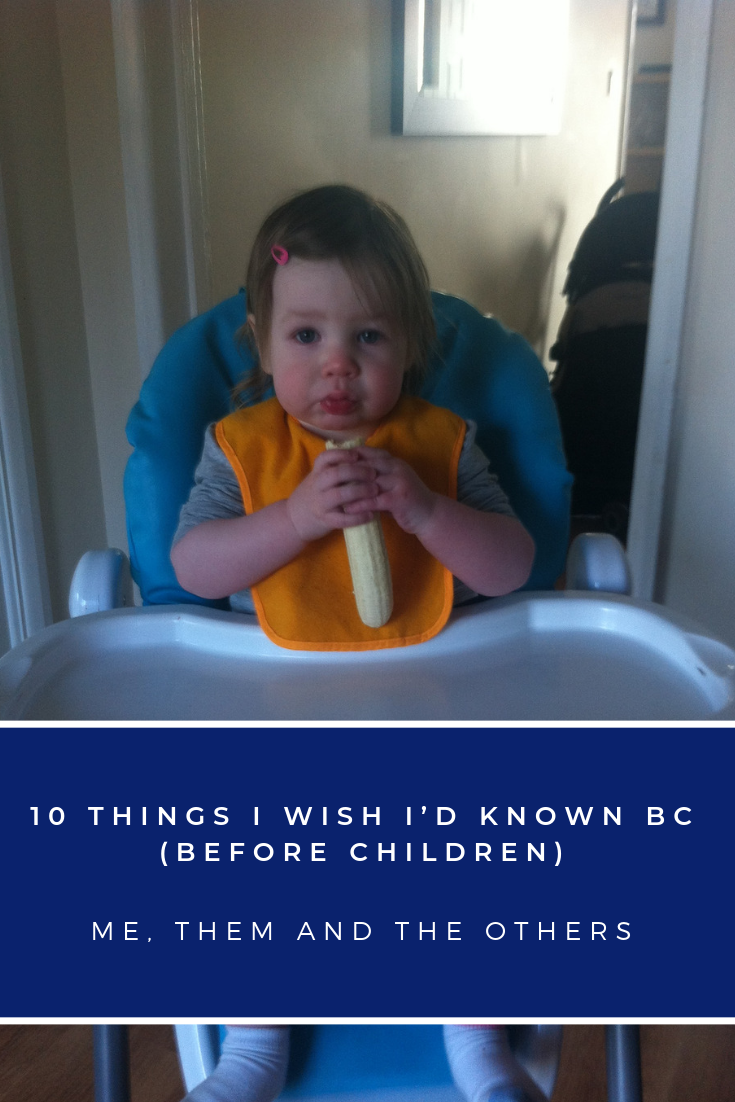