You are here: Home / Babies and Toddlers / How to Do Toy Rotation 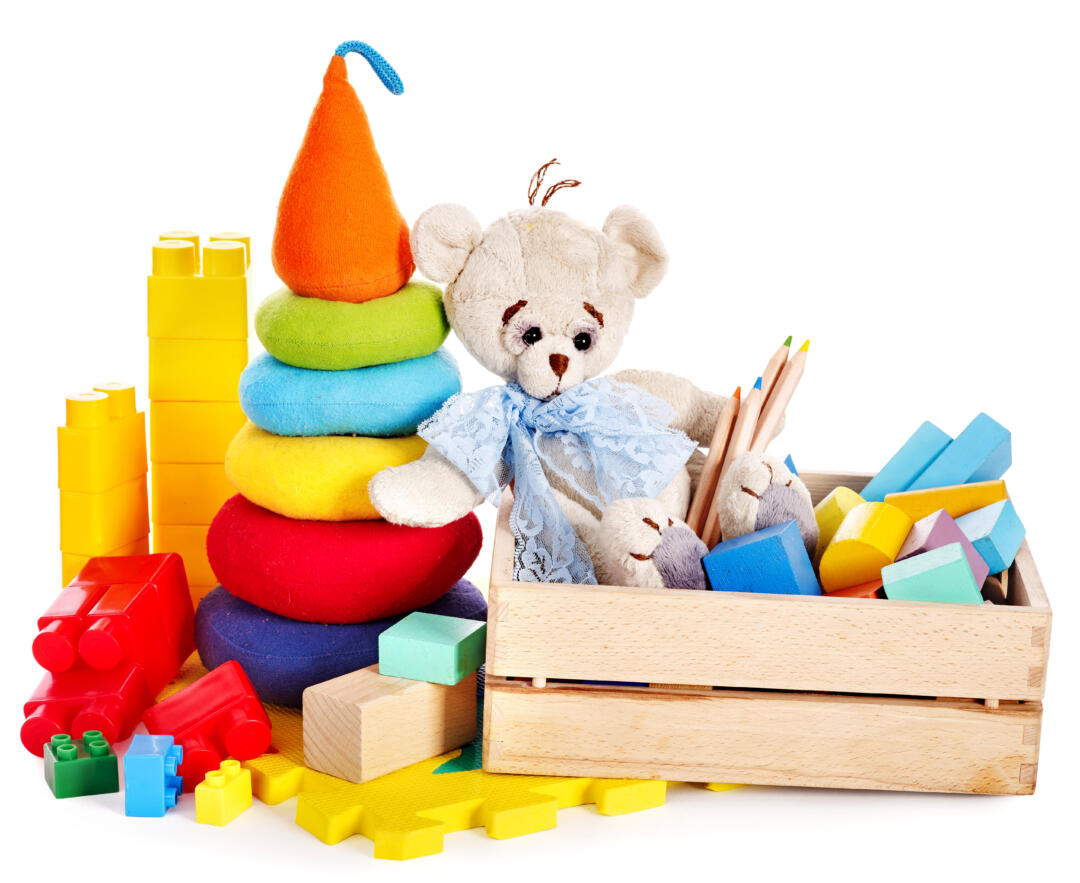 While I’m a pretty rubbish cleaner, I do like my house to be tidy and organised. Young children’s toys can make this somewhat challenging! I’ve found that a toy rotation system helped me keep toys organised, as well as helping the kids to appreciate them more.

What is Toy Rotation?

When I had my first baby, people bought a few toys as gifts. Being the organised type, I went out and bought a nice wicker basket to keep then in. It was tasteful and sat neatly in the corner of the room. As time went on, more toys arrived. My pretty basket filled up. Before long, it was overflowing. As we tended to just grab one of the toys on top when we needed something to distract the baby from trying to eat our keys, I decided to put some of the toys away for a bit. This is how toy rotation begun for us.

What are the Benefits of Toy Rotation?

We found that being able to produce “new” toys was an excellent solution when the baby was grumpy. As he grew into a toddler, swapping the toys over could change a boring afternoon at home into an exciting adventure. Once I had a preschooler, getting different toys out could actually buy me an hour or two of peace and (almost) quiet.

There is evidence to suggest that having too many toys is overwhelming for children and makes it hard for them to settle to an activity. Limiting what’s available at any one time can encourage small children to use their imaginations and play more creatively.

Having less toys available in the play space will five children more physical space to play. It’s also likely that you’ll be able to display the toys in a way that looks appealing which is pleasant for you and exciting for your child.

You’ll also find that less toys makes tidying up much easier! This is partly because there are less toys, but also because children can find all of the toys easily without having to tip out every container in the house to find what they want.

When to Start Toy Rotation

You can start toy rotation when your children and are babies and carry on as long as it keeps working for you. It’s not worth starting until your baby has amassed some toys but you’ll find that happens surprisingly quickly. Below are some suggestions on how toy rotation works at different ages.

When you have a baby, toy rotation is really easy. If it’s out of sight, it essentially ceases to exist. For this reason, its not worth rotating toys until some degree of object permanence is established. Even once it is, baby memories are short, so you can change your toys over fairly regularly if you want to. You also don’t have to worry too much about hiding the toys that have been rotated out.

Toddlers take a bit longer to forget than babies but are unlikely to question you as to the whereabouts of a particular toy that is out of rotation. We usually rotated our toddler toys around every 3-4 weeks. This was usually long enough for the novelty of the current toys to have worn off and the previous toys to seem novel again.

I usually rotated the toys at night or during nap time so that he woke to found his toys magically replaced.

Preschoolers are a bit more complicated. They are likely to have wised up to what you are doing which means two things may happen. They will ask you for toys that are out of rotation and they will ask you if its time to change the toys yet. Neither of these are a big problem, you just need to make a plan on how you will respond to these requests. Our toys were only stored in a cupboard so it was fairly easy for me to go and grab anything they particularly wanted. If you store yours in a loft or similar you might not be so keen to get them. We also found that there were toys they regularly asked for so stopped rotating those ones.

With requests to rotate toys, you can either follow their lead and rotate the toys when they ask, or a have a set period of time and explain they need to wait. If your child doesn’t ask until they are genuinely bored with the current toys then rotating on request might work best but if they are asking after a day or two you might need a set timescale.

Toys continue to be a big part of children’s lives for a long time and if rotation works for you then there’s no reason not to continue. Your toy categories (see below) will probably be different and striking a balance of different toys in each rotation will be less important. As older children often have phases where they are very into something (superheros, Barbie, particular TV shows etc) you will need to be mindful of their current interests and might need to leave some things out for longer or time rotations to coincide with their changing interests.

How to Start Toy Rotation

You might think that you need to have a huge number of toys to have a rotation system but that’s not true. Think about how few toys our parents had growing up. As a child I probably had about a third of the toys that my children have. Children don’t need loads of toys, if they have less, they will likely just use them better. Even with ten toys, you could still benefit from rotating them.

To do toy rotation, you’ll need some containers. You can use proper storage boxes or just cardboard ones. You’ll also need somewhere to store the toys when they aren’t in use. When you just have a baby, they don’t really need hiding but as they get older they will need to be out of sight. In cupboards, under beds, in a garage or in the loft can all work.

You can do toy rotation perfectly well with just two sets of toys but as they get older, and the number of toys you have grows, you might want more than two sets. I had three by the preschool years which was the most I could reasonably store.

If you have children of different ages, you can rotate all of their toys together, so that each rotation has some of each child’s toys. Alternatively, you can separate them out and change one child’s more frequently. This can work well if you have a baby and a toddler or preschooler.

How to Organise Toy Rotation

If you don’t have a huge number of toys, you won’t need to worry too much about categories but if you’re like me and have ended up with loads of them (mostly due to gifts and visits to the charity shop) then categories can be useful. Below are some suggested toy rotation categories, you would aim to have one item from each category in the rotation.

Explaining Toy Rotation to the Children

How you handle this will depend on the age of your children. Babies and younger toddlers are unlikely to question the location of missing toys because they love so much in the moment. Older toddlers and preschoolers will need some kind of explanation. For this age group, I would suggest you go with the kids a that some of the toys were getting tired and needed to have a rest but would be back when they were ready to play again.

For older children, you can be honest about why you’re doing it. Explain that they have so many toys, it’s difficult for them to know what’s there and you’re struggling with space to keep them. By putting some away for a while they will have more space to play with the ones that are out. You might also want to offer them the opportunity to specify any toys they really don’t want to be part of the rotation.

What About New Toys?

New toys are novel and if you try to rotate them too quickly they will definitely be missed. If it’s just one new toy, it’s sensible to leave it out of the rotation until the novelty has worn off and then add it to the relevant collection.

If it’s been someone’s birthday or Christmas it can be better to take a different approach. Straight after Christmas I would remove all of the usual toys (apart from those we don’t rotate, see below) and just leave the new toys out for the usual period of rotation. If you have just one child, you can do this after birthdays too. If you have more than one child, this is tricky because you don’t want to leave out only one child’s new toys that everyone has to share. If you rotate each children’s toys separately you can just remove the birthday child’s toys but if not, you might have to put up with more than the usual number of toys around for a little while.

What We Don’t Rotate

We tended not to rotate large toys like ride ons and play kitchens. This was for practical reasons really but if you have a lot of large toys and space to store them there’s no reason not to rotate them.

We didn’t rotate art suppliers as we wanted them always to have access to those but there were (and still are!) some that they could only use with an adult. We also didn’t rotate soft toys are neither of our children really played with them, they just got carried around the house from place to place!

With books, we didn’t rotate our own books (although we certainly had enough to do it) but we used the library regularly so there were always plenty of different books for them in the house.

A friend of mine took a slightly different approach to toy rotation. It’s but drastic for me but worth mentioning because it might suit some people. Books, games, sports equipment and lego were kept out all the time. All of the other toys were out in the garage and every Saturday the children could go in and choose one toy to play with that week. Once they had chosen that was it, they could change again until the following Saturday.

It sounds extreme (and you could take a gentler approach with a few toys being chosen each week) but she did find they made better use of their toys plus she was able to see which toys they never picked and get rid of them. It’s not something that would work well with very little children but is worth considering for older children.

A Checklist for Toy Rotation

We stopped rotating toys around the age my oldest stared school. We found by then that changing the toys over didn’t get them as excited as it previously had. The focus moved then to trying to actually get rid of some of the toys although it’s only now that they are 7 and 9 that I am managing to get rid of more toys than I am gaining!