We were kindly gifted some free rides and treats at Carter’s Steam Fair in exchange for this review but all opinions are our own.

Carter‘s is a traditional style fair with many steam powered rides along with traditional side stalls like “Hook a Duck” and “High Striker”. Carters have been running their fair for more than 40 years and have sourced and restored rides from all over the country. Over the years I’ve often seen the signs for Carters Steam Fair and have always been intrigued by the idea of an old fashioned fair. This year we finally managed to make a visit and weren’t disappointed.

The Rides at Carter’s Steam Fair

The rides range from small roundabout type rides to much bigger, more exhilarating ones. As our children are 6 and 8 we went mostly on the larger rides. Some of these, like The Chair O Plane and the Jets, will be familiar from more regular fun fairs. Other rides, like The Steam Yachts, are almost unique to Carter’s Steam Fair. 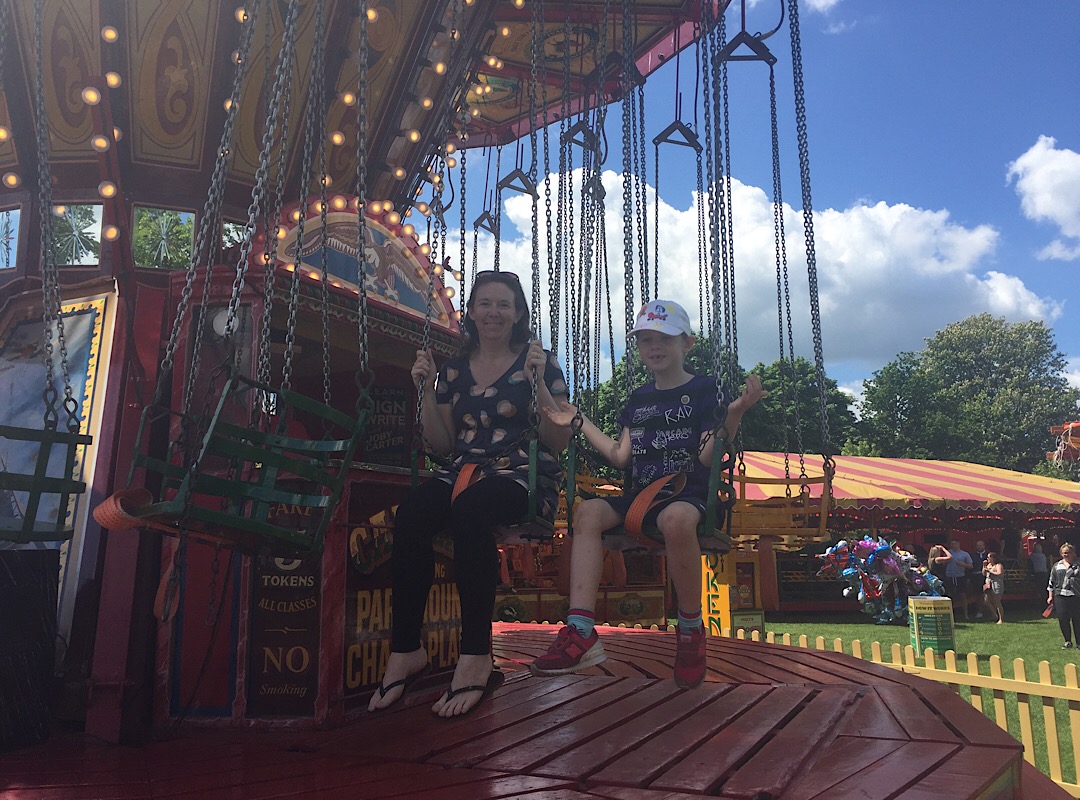 The Gallopers is a traditional English ride similar to a carousel (which is actually American, who knew?) and the beautiful steam engine that runs it is in clear view. I even saw them adding the coal which I found way more exciting than I should.

The favourite ride for both my children (and husband) was the dodgems. You have to be 1.1 metres to ride and 1.3 metres to drive. Girl Child went on with Chris while Boy Child went on alone (because I have more sense that to be a passenger when he’s driving). They were really lucky because for one of their goes they were the only ones in there. They great fun chasing each other around. 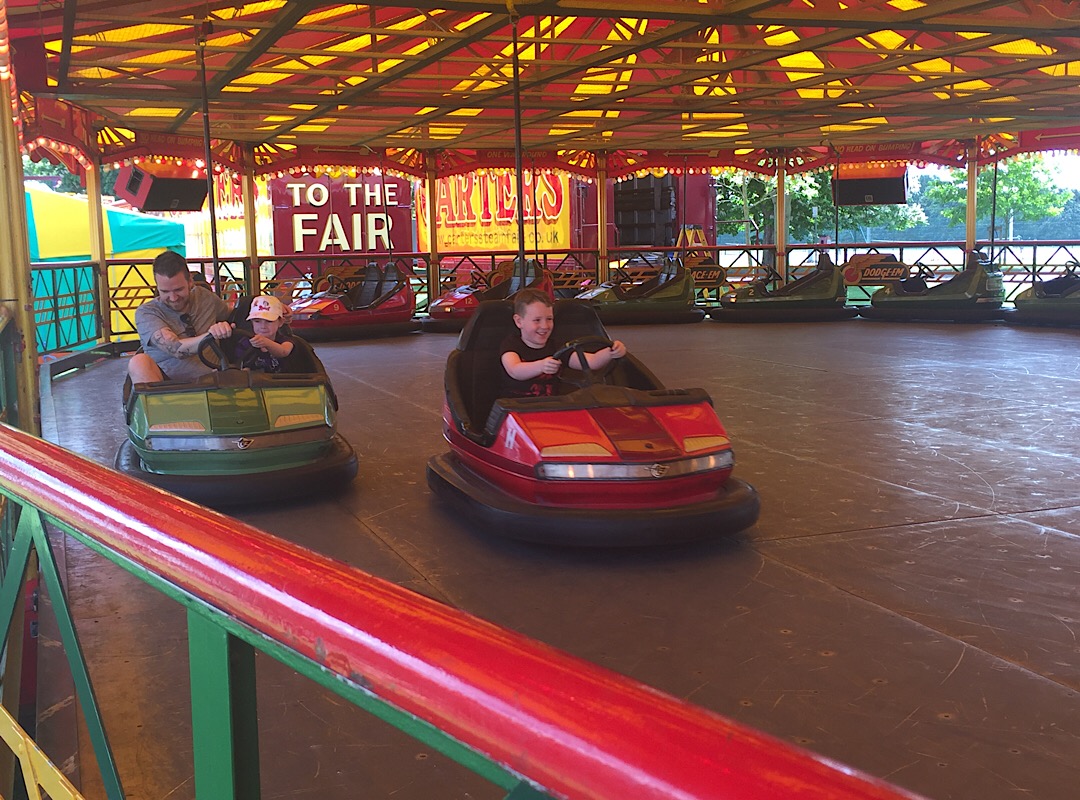 My key advice for people visiting the fair is to not make the mistake we did of getting on a ride before watching it first. I think because it’s an old fashioned fun fair we assumed that none of the rides would be that scary. We were wrong. The Steam Yachts are absolutely beautiful but most definitely fall into the “thrill ride” category! I was lucky, Girl Child didn’t fancy it so I watched with her. Chris and Boy Child needed a good long sit down after it. 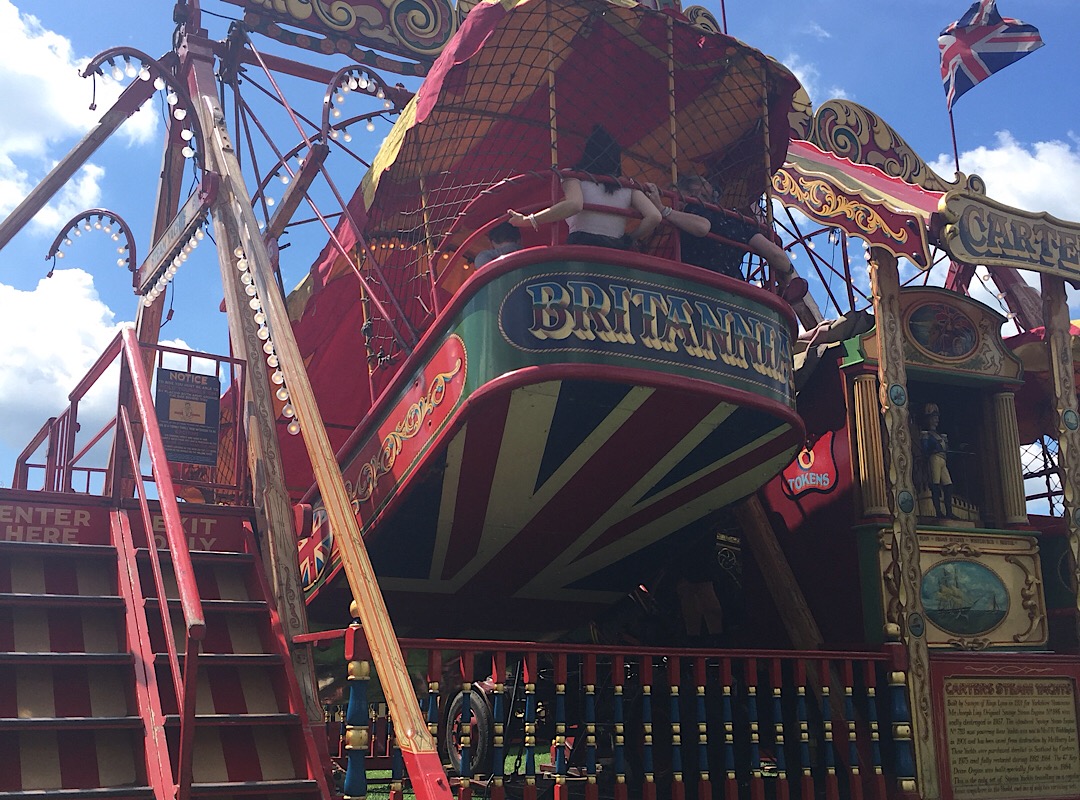 There are lots of side stall with prizes to be won and we all know how kids love prizes.  Girl Child adores “Hook a Duck” so we did both that and “Hook a Fish”. Boy Child loves the High Strikers (that’s what those things where you hit it as hard as you can with a hammer to make the bell ring are called apparently) so we did that too. They were all “a prize every time” so felt like good value and made the kids very happy. 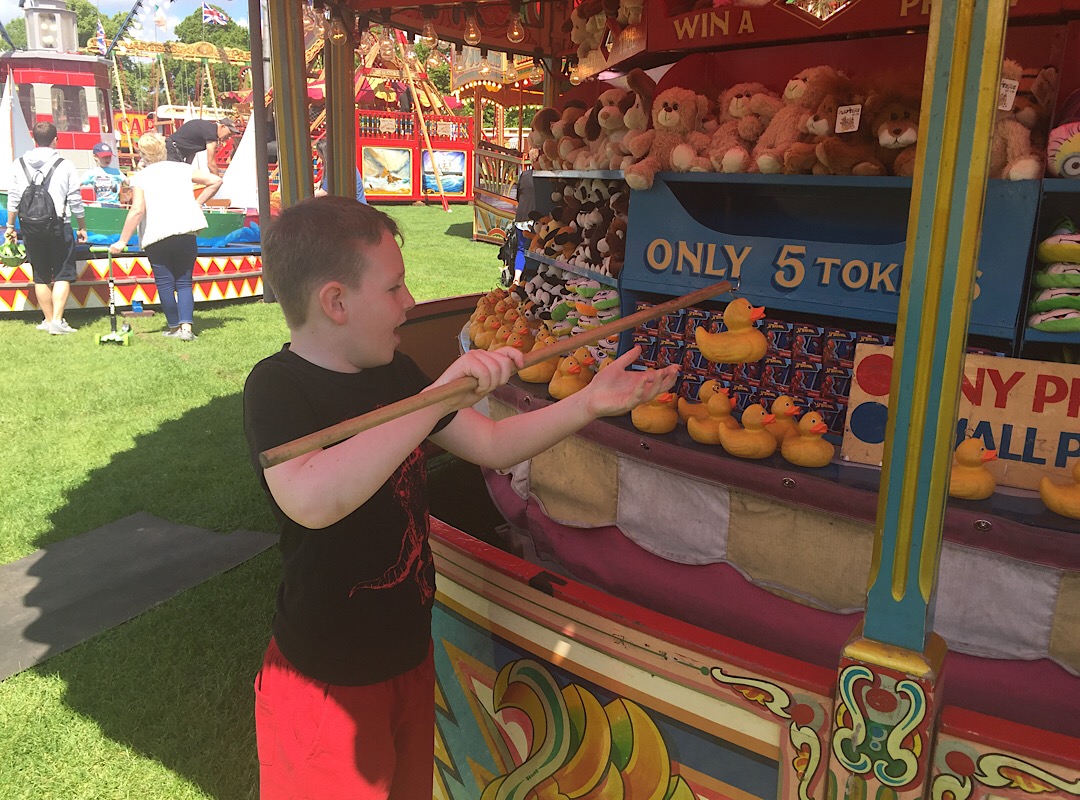 The Atmosphere at Carter’s Steam Fair

The atmosphere is really the thing that sets Carter’s apart from other fairs. Every detail is beautifully designed and authentic so it really does feel like stepping back in time. When you’re close to rides you can smell the steam and it’s lovely that the engines are on show. 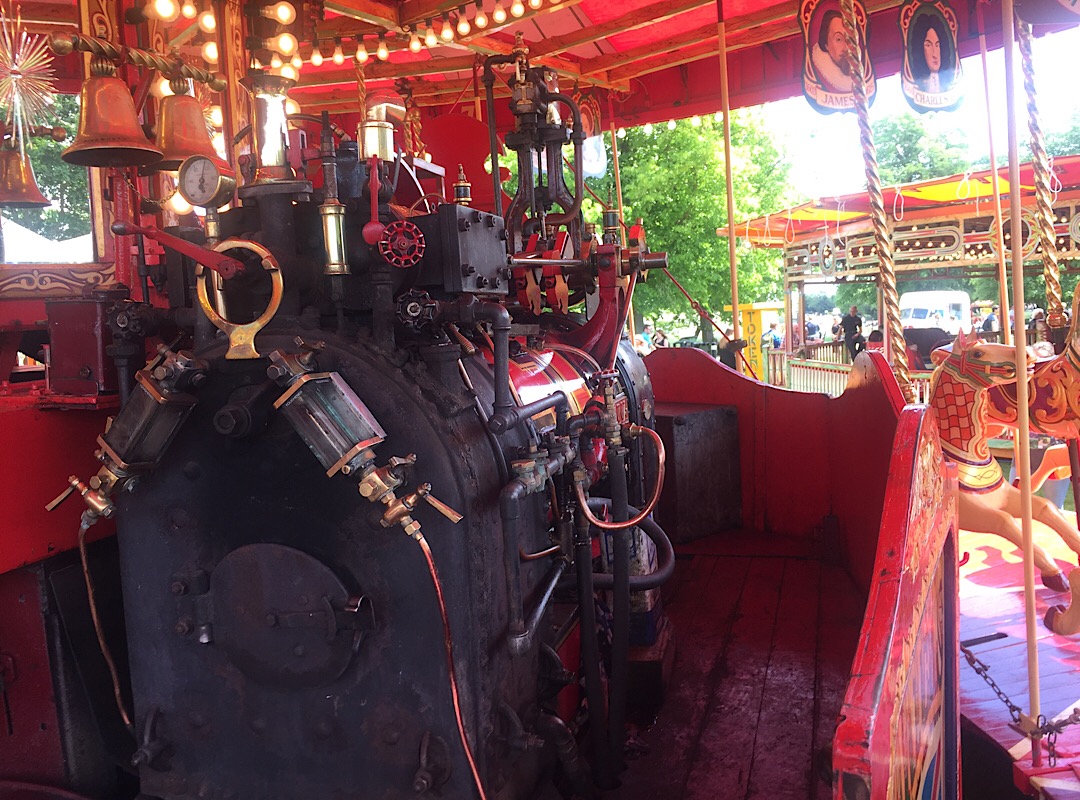 There is music playing and while it isn’t from the same era as the rides, it is older songs that I’d describe as “fun” music which adds to the atmosphere.

The other main thing that makes Carter’s stand out from other fairs I’ve visited, is the staff. Normally at fairs I’ve sort of felt a bit like the visitors are only really tolerated in order that they can be ripped off. Probably harsh but it’s certainly the feeling I’ve had. The staff at Carter’s Steam Fair were nothing like that. Everyone smiled as us, was welcoming and it really felt like they wanted us to have a good time.

The fair travels around the South East of England during the summer months. We visited it at Promenade Park In Malden. It was well signposted on the way there but not obvious once you get to the park. If you head towards the sandpit you’ll see it. Parking at Promenade Park is expensive, but better value if you stay for longer. There’s a pirate ship play area and a sand pit that are both free so we made a day of it and took a picnic.

Below are the ride prices. It’s free to go in and look around so you can easily calculate how many tokens you’ll need for the rides you want to do. 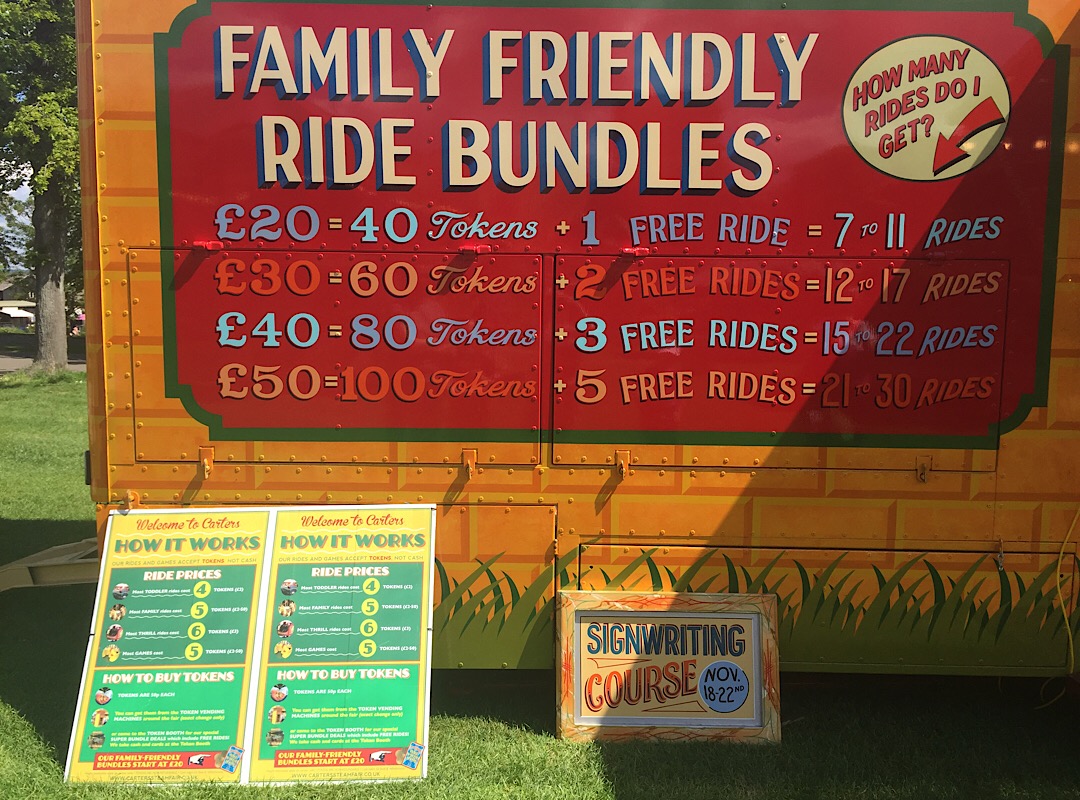 The fair opens from 11am to 7pm daily with late opening until 10pm on Saturdays. We arrived not long after 11 and stayed for a couple of hours. It was quiet when we arrived and just starting to fill up when we left. We didn’t have to queue for anything which is always a bonus with kids. The rides were also pretty long. I don’t know if they are shorter when it gets busy but we were definitely on things longer than I expected to be.

You can find more information by visiting the Carter’s Steam Fair website. If you love rides, check out our review of Paultons Park with older kids.

Enjoyed this post? Why not pin if for later? 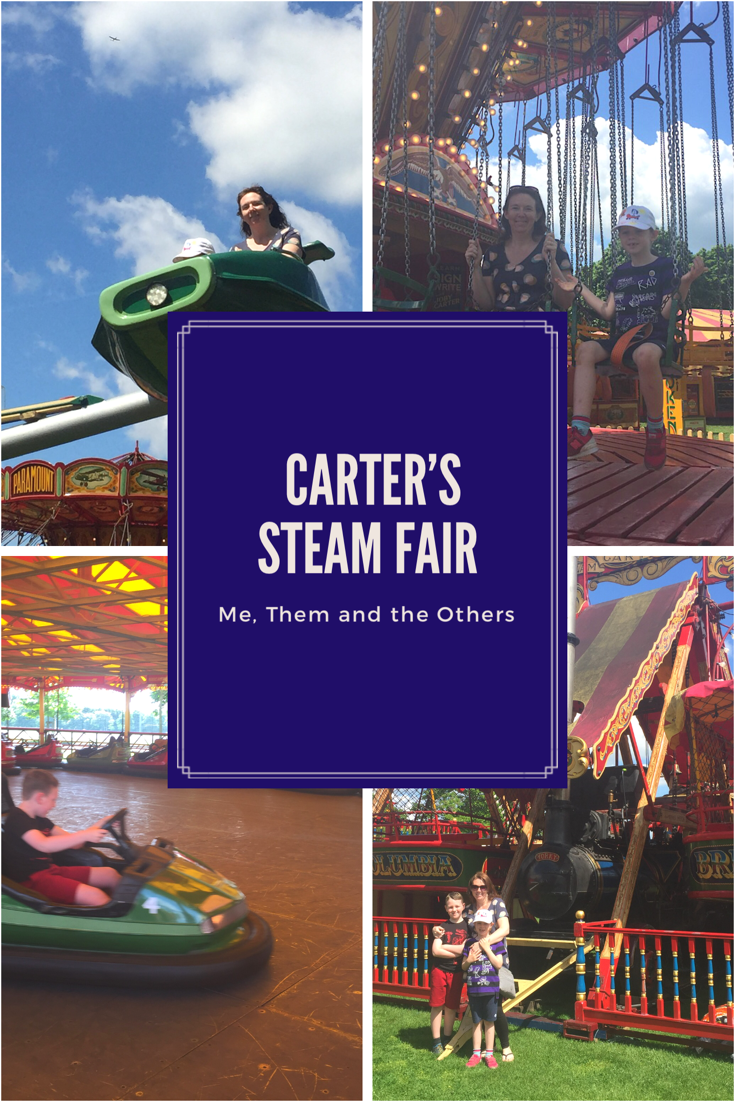